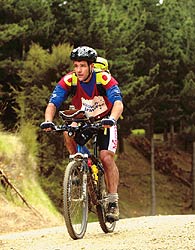 Our bodies are designed to be physically stressed says Dr Jim Cotter, lecturer in exercise and environmental physiology at the School of Physical Education. "Most modern diseases are caused in part by a lack of physical stress." His particular research interest is thermoregulation - "when people exercise, they produce lots of heat. I'm interested in how the body gets rid of that heat," he says.

Dr Cotter was instrumental in putting the science of human performance under the spotlight in the Southern Traverse, one of the world's most challenging endurance events, which last year was raced in the Dunedin area. It was a unique opportunity, he says, to involve the University and its research expertise.

His life-long interest in outdoor pursuits stemmed from growing up on an isolated dairy farm on the West Coast. Now, with four children - Hamish 7, Charlotte 5, Lucy 2 and Grace 8 months - he and his wife Kate are fairly well preoccupied on the home front. But when he gets the chance, it's skiing, mountain-biking or sailing these days, and he has a particular passion for orienteering - especially rogaining or long-course orienteering. 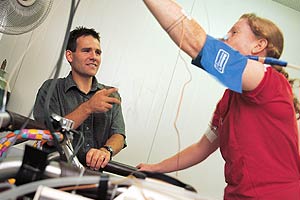 An Otago graduate, he returned to Dunedin in 2001 after an eight-year stint in Australia where he gained a PhD from the University of Wollongong and worked as a research scientist for the Department of Defence in Melbourne.

His teaching philosophy is simple - "I would like people to continually question things," he says, "the information they receive, and their own understanding. That's the foundation of learning."