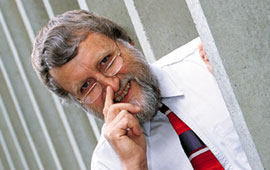 Seeking knowledge can be fun, says lecturer John Tagg. "It doesn't have to be a dreary process."

While Tagg couldn't be more serious about his subject, when the lecture room doors close he admits that sometimes the clown in him comes out to ease the path to learning. Tagg discovered Microbiology by accident when he signed on for a paper just because it fitted a gap in his timetable. He was inspired by the tutor "whose lecturing style was off-beat, candid, natural and entertaining".

During his Master's and after his PhD, Tagg met other outstanding people in his field. "You find there are signposts in your career - such as people who point the way for you whether you realise it at the time or not."

Even Tagg's life-long study stemmed from having rheumatic fever as a teenager. That led to his researching helpful bacteria that might be harnessed to fight disease-causing bacteria - a project that has now launched a successful business venture.

And students benefit from Tagg's off-beat approach. "The point of a lecture is not the communication of facts. That's what libraries are for. It's an opportunity to motivate. And if I'm not having fun in a lecture it's probably not working for the students either."