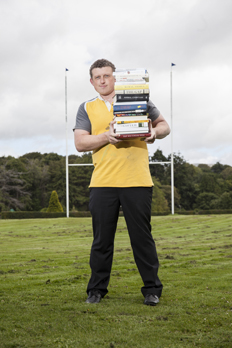 At high school Damian Scarf wanted to learn, but was channelled into the lowest classroom stream.

“Once you’re there it’s almost impossible to work your way up, especially if it is a disruptive class like mine was. By year 11 you’ve already lost out on things you need to do well in years 12 and 13.

“It made me think that playing rugby was going to be my only option for the future.”

Damian failed school and went on the dole — so his subsequent path to becoming a lecturer in the Department of Psychology is inspirational.

He returned to study at polytech to gain entrance to Otago where, inspired by TV animal experts David Attenborough and Steve Irwin, he enrolled in Zoology. He hoped that “if you pick something you’re curious about, things might fall into place and hopefully you’ll get a job.”

It was tough. “I realised that first year success was based on the level you reached at school. I wasn’t at that level. I didn’t have the foundation that I needed. I needed to catch up, and the only way I was going to even just pass was to work really hard.”

Damian’s efforts snowballed, and his marks improved as he progressed through his Zoology degree. But he’d only just begun.

He did a “fill-in” psychology paper on comparative cognition with Professor Mike Colombo, and something clicked. “Mike was incredible. I was sold. I realised I was more interested in the behavioural side of animals, and crossed over to do postgraduate work in Psychology.”

He came up with a research project on the thought processes of pigeons. It grew from a master’s to a PhD, generating nine first author publications and a Fulbright scholarship to the United States.

Now Damian has his own laboratory and PhD students.

“I love teaching and supporting students and trying to raise their interest in the subject, because I know that was part of the key for me. And often students who’ve had to struggle become the best researchers.”