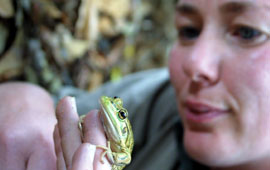 "I'm just trying to identify what we have here - there's only been a one page record in the last 50 years!"

As a Ranger with the Department of Conservation, Middlemiss works mainly in the maintenance of the Park's tracks and huts. But threatened species and weed control are also in her portfolio.

"The Park covers a huge area, including the Mangapura valley, where land was given to returning WWI veterans. Many garden plants, such as holly, ivy and cotoneaster have since escaped from the abandoned house sites.

"Another problem we have here is the proliferation of coastal weeds. Acacia was originally planted to stabilise the dunes and is now rampant. Like a lot of weeds, exotic species tend to take over which makes it difficult for some of our threatened native species to compete."

Although she's more involved with plants than animals these days, Middlemiss was drawn to Zoology partly because she wanted a job-related course, but also because she was an outdoors person interested in conservation.

"What I loved about the Zoology Department at Otago is that it was always buzzing. There's so much going on there - wildlife management, ecology, reproductive endocrinology, genetics - it's a very inspiring department."

And the skills she picked up on the way are fundamental to the work she does now. "Analytical skills - what is the problem and how do we fix it? - as well as time management, project management and basic skills like report-writing are all necessary in this job. Being able to absorb a lot of information and eliminate irrelevant bits is vital."

Several stints as a hut warden in various National Parks around the country have also had a hand in getting Middlemiss to where she is now. Digging ditches along the Routeburn Track in relentless rain might seem nightmarish to some, but for Middlemiss, the rewards that come are worth it.

"On that particular occasion, every bit of me was soaked. I was cold and only halfway through the job when I looked up and saw a kaka sitting on a branch just metres away. It wasn't bothered about the rain, but was just happily munching away. It puts things into perspective and that's what makes it all worthwhile."