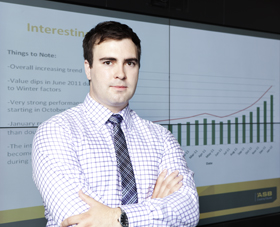 Bonar Carson chose Otago because of its good reputation for science.

“I found Physics really intriguing and thought provoking – it just drew me in. I wanted to know how and why everything in the world worked and Physics was the best way to answer those questions. Physics was what worked best for me.”

Bonar followed his first class honours BSc with a master’s in space physics, investigating relativistic electron precipitation — what happens when electrons trapped in the radiation belts collide with the earth’s atmosphere.

“It was a world first project noone else had investigated on this scale, and even though we are in a remote part of the world I had regular interactions with colleagues in the USA, the UK and Europe.”

Bonar had his mind on space, but his feet on the ground.

As a student he helped with tutoring and with Hands-on Science, and was a sub-warden at Arana College for two years.

“We weren’t there to stop anyone having fun but to stop them taking things too far, offer support with any issues and help them have an awesome time — make their time at college as enjoyable and productive as possible.”

He also worked with the Red Cross, spending time with an emergency response team in post-earthquake Christchurch.

Even before he completed his master’s — with distinction — he was recruited to the analytics stream of ASB’s Future Me graduate programme, trading physics for banking.

“Physics and mathematics made me comfortable with numbers – a numerical problem-solver. Physics taught me how to learn and put that knowledge to use. I’m using the same skill set that I learned for electrons and space, but now with customers and dollars, and it’s very exciting.

“Otago prepared me better than I would have predicted. Not just the learning that you do at university but also the learning you do outside the classroom – learning about life.”