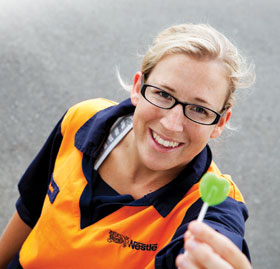 How does Jane Oliver explain the large number and wide range of jobs available to university graduates with degrees in Food Science?

Simple, she says: “Everybody has to eat”.

Jane completed her degree in November 2009, and by December, she was working as an Operations Performance Co-ordinator for Nestlé New Zealand, a role that involves analysing the way that the company manufactures and delivers its products and working on ways to increase its performance.

“It’s an ideal job for me,” Jane says. “I really enjoy working with people and my work allows me to work closely with a lot of different people. Working for an international company also means that a lot of importance is placed on your professional development and there are a lot of opportunities for training, networking and travelling.”

Jane undertook a double degree in Food Science and Accounting, and she admits that she did not realise how well the subjects would complement each other until she graduated.

“Both sets of skills are highly relevant to my current work. An important part of enhancing the company’s performance is figuring out how to increase efficiency and to reduce waste and costs, so accounting comes in very handy.”

The transition from school to work and the ease with which she found a good job was made easy by the Food Science Department’s focus on connecting students with New Zealand companies while they are studying, she says.

And with continuing advances in technology, emerging markets for food products and a growing global population, Jane believes Food Science graduates will have rewarding careers to look forward to for many years to come.