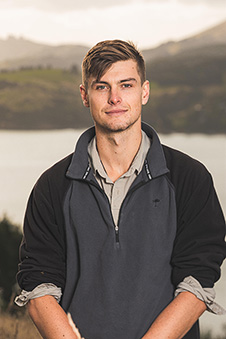 “From a young age, I always liked the natural world. I was obsessed with the likes of Steve Irwin, and I was always flipping stones and trying to find creatures wherever I went. When I came to university, the choice to study something that I thought was interesting seemed like a no brainer. I selected a wide range of courses from marine science to geology, but the subjects I enjoyed most were botany and ecology.

“One of the things that guided me into studying botany at Otago was the department and its people – it’s a really positive environment where everyone is welcome. Outside of university, Dunedin has had a big effect on me – it’s such a lucky city in that it has some of the most extraordinary wild spaces in the world within its city limits. Having this resource has been great in growing my passion for the outdoors and allowing me to apply some of the things I have learned at university.

“Simply through talking to land owners in areas that contain the rare plant species I study, I have raised awareness. Hopefully my research will help to guide decisions to protect the environments in which the species live, and in doing so secure them for future generations. I also hope that through telling every person I meet about rare, carnivorous aquatic plants that can catch prey in under 10 milliseconds, I might convince them how cool botany can be!

“For me, university has not only been a place to learn and meet some amazing people, but I have also been involved in several outreach and community engagement activities. As much I as love learning about our natural world, it’s so much fun to share knowledge with others.

“One of the first opportunities was to be part of the brand new Wild Dunedin Festival which connects Dunedin residents with their own amazing natural history. It also cements Dunedin as the wildlife capital of New Zealand – a title it definitely deserves. Following that, I became involved in educating school-aged students about conservation at Orokonui Ecosanctuary and, through a relationship with the Department of Botany, created a programme to teach botany to senior high school students.

Perhaps the best outreach activity I’ve been part of is the Science Wānanga programme in which, on three occasions, I got to stay on a marae and help communicate science to local rangatahi [young people]. As someone who is still early into their journey exploring their own whakapapa [identity], I can say with confidence that on every one of those trips I learned more from the students than they learned from me. This, I think, sums up how when education is working well, it is a conversation of learning in both directions.”