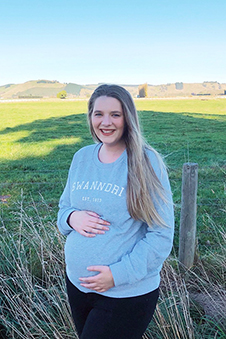 My name is Charlotte Bruce Kells and I am currently working toward my MA in Gender Studies. My research interests lie primarily in the ways we engage with media and the influence this has on how we interact with and enact gender. In 2018, I completed my dissertation, looking at the role of romantic comedy films in normalising gender dynamics in dating relationships. I began my Masters in 2019 when, inspired by the media frenzy around Jacinda Ardern, my focus shifted to media representations of 'working mothers'. This interest in media and motherhood was compounded at the end of the same year when I became pregnant with my first child. Inspired by my own experience as a pregnant woman, and now mother, I hope to continue research in the area of motherhood and 'women's work' for future study.

In January 2018 Jacinda Ardern, New Zealand’s third female Prime Minister, made history when she announced that she and her partner, Clarke Gayford, were expecting their first child. This child would make Ardern the second woman in history to give birth while holding elected office, and news coverage on both a national and global scale exploded. News media narratives are an accessible, popular and trusted medium where dominant cultural values and ideologies are portrayed to populations on a mass scale. As such, media narratives centred on the implications to widely held cultural beliefs around work and motherhood, as a result of Ardern being both a mother and Prime Minister, were quickly disseminated to the masses. This research is a mixed methods study, consisting of narrative analysis of articles about Ardern as a mother over a 24 month period (August 2017 - July 2018), and a survey of over 200 New Zealand women. The narrative analysis identifies four primary narratives employed in news media articles about Ardern: ‘Part-Time PM’, ‘Wonder Woman’, ‘Catalyst for Change’, and ‘Community Ownership’. The survey responses and relevant feminist literature are then used to discuss the identified narratives. The analysis aims to examine how women are interacting and engaging with these narratives, how they push back against them, and how they align with their perceptions of being a mother in paid employment in New Zealand.