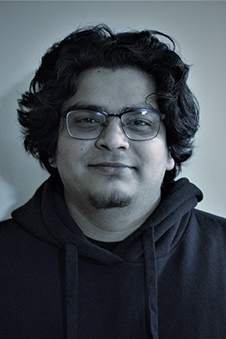 Suddhabrata Deb Roy hails from the tiny north-eastern town of Silchar in India, but since the beginning of 2020 he has made Dunedin his home. His research focuses on Marxist theory (Classical-Critical-Contemporary) and Feminism, and the analysis of working-class social movements through these paradigms. The primary emphasis of his research is upon the workers in urban areas. The broad stroke summarisation of his doctoral research is:

“With the coming of age of neo-liberalisation and globalisation, workers all over the globe are suffering, both as individuals and as a social class. Most currents of Marxist theoretical analysis are still in search of the elusive ‘agent of revolution’, in the process of which they have emphasised the ‘social entity’, the agent, but neglected the dynamic processes of its formation. Most of the feminist currents, again, have mostly emphasised the universality of gender at the expense of other social attributes, and have focused on individualised approaches towards capitalism and patriarchy.

It has become important, today, to investigate the nature of left-wing social movements, especially the Trade Union movement and its relationship with the independent Feminist Movement in neo-liberalised societies. While the gendered nature of employment in certain sectors, like the garment factories of Bangladesh or the call centres of India, has been debated and discussed in great details, little has been done to provide a paradigm which is simultaneously non-reductionist and non-prejudiced in nature. The current research attempts to do that by investigating the lives of trade unionists, civil society activists, politicians and working-class women. It attempts to reinvestigate the relationship between Marxism and Feminism through a lens which does not privilege either class or gender. The research gains relevance from the high rates of feminisation of the workforce, coupled with a dwindling trade union and workers’ movement. The research attempts to provide a new approach towards understanding the relationship between social class, postmodern identities, gender, and Marxist-Feminist theory.”

His doctoral work takes root from his primary research interests which are social class, gender, social movements, space, the urban, corporatisation, political economy, dialectics, and Marxist-Humanism. He also has interest in a broad range of themes including industrial relations, sociology of sports, environmentalism, digital capitalism, Deleuze and Guattari Studies, human-animal studies, popular culture (mainly comics and popular South Asian television), Critical HRM Studies, and psychoanalysis. His writings have appeared in peer reviewed journals along with some chapters in edited volumes spanning diverse topics. Apart from his doctoral research, he is working on certain long form projects, the details of which will be updated in due time in the near future.