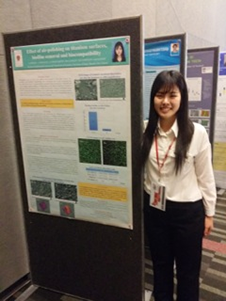 The SJWRI congratulates BDS student Linda Hwang on being the winner of the Junior Colgate Award for the best undergraduate research poster at IADR ANZ 2014, the 54th Annual Scientific Meeting of the International Association for Dental Research Australia & NZ Division in Brisbane last week.

The title of Linda’s poster was 'Effect of air-polishing on titanium surfaces, biofilm and biocompatibility'.

As part of her prize, Linda now has the opportunity to present her work at the General Session of the IADR in Boston next year.

During the closing ceremony of the meeting, Dunedin was announced as host city for IADR ANZ 2015, the 55th Annual Scientific Meeting of the IADR ANZ Division, which will be held at the Dunedin Public Art Gallery from August 23-26 next year.