Congratulations to Associate Professor Brian Monk of the SJWRI's Molecular Microbiology research programme on being awarded a three-year Project grant worth $1,197,552 in the 2016 Health Research Council of New Zealand Funding Round, for his project 'Structure-directed discovery of next-generation antifungals'. Other named investigators from the SJWRI involved in this project are Dr Mikhail Keniya and Dr Rajni Wilson, along with Associate Professor Joel Tyndall of the School of Pharmacy. 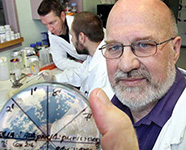 The aim of this research is to identify and develop next-generation antifungals to augment existing triazole drug treatments that are prone to drug resistance by infectious fungal microbes. This project follows on from an earlier study funded in the 2013 HRC round, which investigated the structure of a key fungal metabolic enzyme lanosterol 14α-demethylase (CYP51). 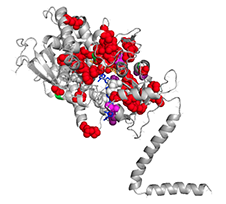 CYP51 catalyses the key step in the ergosterol biosynthetic pathway targeted by triazole antifungal drugs. Through this work, the team have obtained high-resolution X-ray crystal structures of wild type and triazole resistant CYP51s, complexed with substrates and triazole inhibitors (right).

This project will apply these structural discoveries to improve drug specificity, by modifying several features of existing antifungals to develop broad-spectrum drugs that can target fungal CYP51 and not its human homologue or other key metabolic enzymes. The identification of new antifungals will provide a model for drug discovery and development that circumvents the ubiquitous activities of cytochrome P450 enzymes.

A/Prof Monk's project was one of 17 Otago projects funded in the 2016 HRC round, in addition to five major, multi-million-dollar, five year programmes including renewal of the Dunedin Study for its age-45 assessments. Funding for the dental component of the age-45 Dunedin Study assessments, led by the SJWRI's Dr Jonathan Broadbent, was secured in the 2015 HRC Funding Round. In total, University of Otago researchers were awarded around $43.8M in new health research funding to support world-class studies aimed at improving New Zealanders’ health and well-being.