The International Association for Dental Research held their annual General Session in Seoul, Republic of Korea from 21-25 June 2016. This was a joint meeting of the IADR General Session, IADR Asia Pacific Region and our local Australia-New Zealand Division. Some 3,600 delegates were part of the meeting, held in the COEX conference centre in the Gangnam district of Seoul. The SJWRI and Faculty of Dentistry were well represented with 16 staff, two postgraduate and three undergraduate students attending. 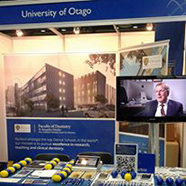 The SJWRI hosted a booth at the Exhibition (right) to promote the activities and achievements of the Institute and the Faculty. The booth proved to be very popular amongst attendees and also offered a focal point for the NZ attendees. Thanks go to Dr James Smith from the SJWRI for all his efforts organising and staffing the booth. An alumni event was held on the opening night of the meeting.

The achievements of several SJWRI researchers were recognised through a number of awards: