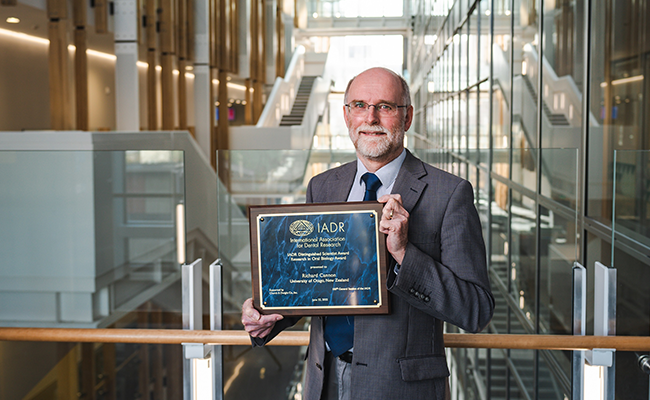 Professor Richard Cannon, Deputy Dean of the Faculty of Dentistry, has received one of the most prestigious awards bestowed in international dentistry for his research into oral diseases.

The Distinguished Scientist Award for Research in Oral Biology from the International Association for Dental Research (IADR) recognises Professor Cannon’s outstanding research in oral microbiology, an area that has held his interest for his entire career.

“I am extremely honoured to receive this acknowledgement of my research achievements from the international dental research community,” Professor Cannon says.

“Microbiological research is very engrossing because microbes are evolving so fast - you come up with a solution but then they evolve a way to get around that. You’re never finished there’s always more to do, because the microorganisms replicate so fast and mutate and change and evolve.”

Dean of the Faculty of Dentistry at Otago, Professor Michael Morgan says Professor Cannon has been an outstanding leader whose sensible and pragmatic approach has garnered praise and respect by all his colleagues, alongside his research abilities.

Professor Cannon has also made major contributions to the understanding of fungal drug resistance and compounds that overcome that resistance, and seminal research on the role of saliva in oral colonisation of C. albicans.

Professor Cannon was born in Nigeria, where his British parents were working in a mission hospital and returned to England when he was an infant, and he grew up in Watford.

He completed a biochemistry undergraduate degree and went on to focus on Candida (yeast) research for his PhD with the Department of Biochemistry microbiology unit at Cambridge University in the United Kingdom.

While he was a PhD candidate Professor Cannon was aware of groups around the world doing similar research, including at the Faculty of Dentistry at Otago.

“At that time there was a very strong group in Otago doing research on Candida. This included Professor Max Shepherd, who set up the Experimental Oral Biology laboratory in the Faculty of Dentistry. I met Professor Shepherd when he visited Cambridge and then it just so happened that a job came up in the dental school, which I got. When I came here, I had no dental background at all.”

He made the deliberate decision to pursue an academic career, rather than in the private sector, as he enjoys teaching and sharing knowledge, and the greater freedom in research.

Professor Morgan says he is a respected colleague, “I have been extremely fortunate to have Richard to go to for advice and for his good-natured approach to university business. With his diverse set of skills and collegiality, Richard manages people and issues with equal skill. I remain indebted to him for his strength and quiet determination.”

Professor Cannon says his career breakthroughs have come through collaboration, and he has really appreciated my co-workers and collaborators – “for both the friendships and the work we have been able to do together.”

He has worked with supportive colleagues in America, which led to grants from the National Institutes in Health in America, and Europe and Asia.

Professor Cannon has also hosted scientists from Japan and visited the country often, particularly with long-time collaborators Dr Masakazu and Dr Kyoko Niimi. Now the Otago Faculty is developing links with China and is undertaking research with dental schools in China.

“There has always been a very strong research group in the Faculty of Dentistry in molecular microbiology and oral biology, and it’s been a real pleasure to work with a number of wonderful staff and students over the years who have contributed greatly to this research.”

The Award was announced at the IADR’s 2022 General Session, held virtually on 22 June.