Busy making the school lunches early one morning in April, Eryn Duffy happened to catch an item on The Edge radio station about a competition to win $2,000. Entrants had to say what they would do with the money, and on the spur of the moment Eryn texted in saying if she won, she’d love to give the money to ExPinkt™, a breast cancer gym in Dunedin run through the University of Otago’s School of Physical Education, Sport and Exercise Sciences (SPESES). 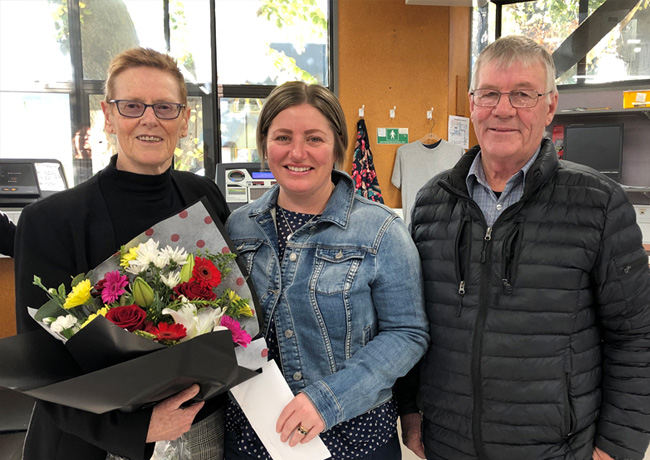 The station got in touch and said she was on the shortlist, then 15 minutes later she was on the radio being told she was in to win – but there was, literally, a catch. For the prize to be awarded, The Edge presenter Steph had to catch a cricket ball hit for six by Blackcap Tim Southee, in Eden Park.

Twenty-four hours later and Steph missed the catch, but the two businesses sponsoring the prize, Miss Lolo and SleepDrops, have both been personally affected by breast cancer, and decided they wanted to give the money to Eryn for ExPinkt™ anyway.

“I entered on a whim – it was just meant to be,” she says. Eryn, along with her sister Alyce Perkins and dad Russell Peek, lost their mum and wife Lynda Peek to breast cancer in February last year. 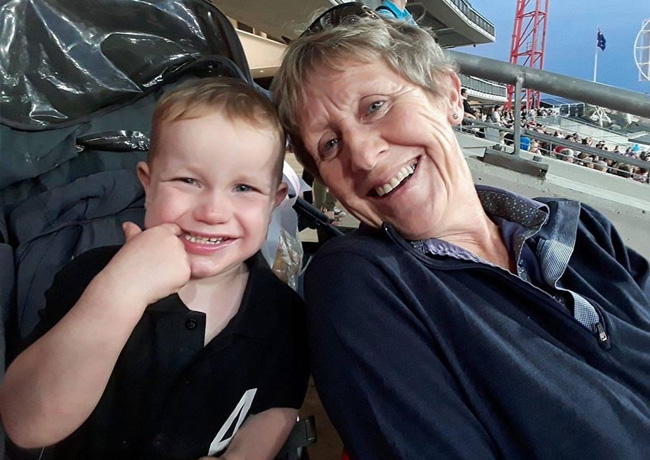 Lynda Peek with her grandson Hunter

Eryn and Russell came up to Dunedin from their homes in Riversdale and Gore in Eastern Southland on Tuesday, to present the gift to Associate Professor Lynnette Jones at the gym.

“It’s very, very much appreciated,” says Associate Professor Jones, who established the gym in 2009 to offer exercise programmes for people undergoing breast cancer treatment. Clients are referred by their oncologists, and today people with other cancers are also able to take part. 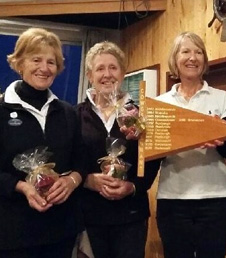 Lynda with fellow members of the Ardleigh Golf Club

A keen golfer and an all-round active person, once she heard about ExPinkt™ Lynda was determined to be able to join the programme and became the first person with metastatic cancer to attend. Living in Outram near Dunedin at the time, she went along to sessions every week for two years.

“It was massive for mum,” says Eryn. “She found her strength and community at this gym. It became her religion to go every week, even in immense pain, because this was her solace.”

Eryn says as well as benefitting physically from keeping her body moving at such a difficult time, mentally it was hugely beneficial for Lynda to be part of a like-minded, active and determined group of women. 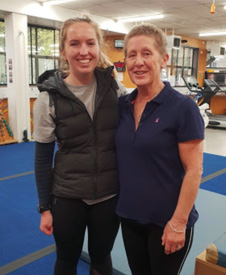 Russell would drop her off each time and he says ExPinkt™ meant “almost everything to her. She just went from week to week for it”.

Associate Professor Jones says the gym is the only one of its kind in the country, and currently has one full-time trainer and around 110 people attending each week.

Exercise and Cancer Rehabilitation papers taught at SPESES sit alongside the programme. By studying the development of cancer and the effects of cancer and its treatments on the body, students are better equipped to work safely and effectively with people with cancer.

“It’s a highly specialised area for trainers to work in,” says Associate Professor Jones. “They need to understand which exercises shouldn’t be undertaken, how to deal with things like shoulder stability after surgery, or how different chemotherapy treatments can have different effects on training.”

Eryn says Lynda’s ambition was for the programme to become mainstream and offered in other centres. She says she can’t thank the sponsoring businesses enough and sees the donation to the gym as a way of “paying it forward”.

“What mum got out of here was the best medicine, and it’s so nice to return something.”

ExPinkt™ is funded by SPESES and is also a priority fundraising project for the Development and Alumni Relations Office (DARO) at Otago, with donations administered by the Otago Foundation Trust.

Director of DARO Shelagh Murray says the gift from Eryn and her family will help ExPinkt™ continue to provide a unique service to its clients.

“It’s a wonderful, thoughtful gift and reflects the strong personal connection the gym has with its clients and their families. We’re very grateful to Eryn, Alyce and Russell, and the sponsoring businesses, for their generosity,” says Ms Murray.