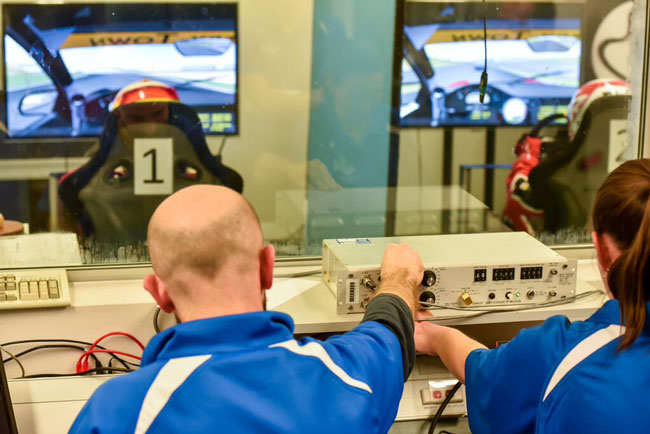 Eight of New Zealand’s top up-and-coming motorsport drivers were put through their paces at the University of Otago School of Physical Education, Sport and Exercise Sciences last week during the 12th annual Elite Motorsport Academy held in Dunedin.

"The drivers are subjected to a session driving race car simulators in 42 degree, 60 percent humidity for around an hour while fully kitted in their race suits, helmets and gloves."

The School has been involved in the week-long Academy since its inception, helping to make it an important fixture on the country’s motorsport calendar.

This year’s academy was held from Monday 29 June to Friday 5 July.

In partnership with the Motorsport New Zealand Scholarship Trust and the New Zealand Academy of Sport South Island, the University helps to deliver a tailored high performance driver academy to the rising talent of New Zealand motorsport.

The programme, initiated in 2004, focuses on equipping the drivers with the skills required to cope with the intense demands of world-class motorsport competition. Selected drivers are immersed in the world of high performance sport, being exposed to disciplines such as physiology, mental skills training, nutrition, media training and life management skills.

The School of Physical Education, Sport and Exercise Science hosts the academy for three of the seven days.

Electronics Technician Nigel Barrett, who coordinates the University’s part of the Academy, says the School provides both specialist knowledge and resources. 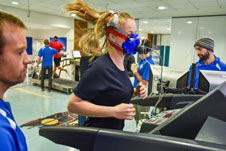 The Academy also makes use of the School’s Environmental Climate Chamber to simulate conditions in the cockpit of a race car.

“The drivers are subjected to a session driving race car simulators in 42 degree, 60 percent humidity for around an hour while fully kitted in their race suits, helmets and gloves,” Mr Barrett says.

“The purpose of this is to make them aware of the huge demands commonly placed on the body when racing in hotter climates while having to perform at their best. During the session a range of physiological parameters are measured and then summarised in a later feedback session. This session ties together several of the other areas that the drivers are instructed in over the period of the academy, including nutrition, hydration, physiological demands and mental skills.”

What the drivers say:

Brad Lathrope says the Academy has taught him what it takes to become an elite athlete.

“Every aspect of the Academy was hugely beneficial for me. I now understand the difference between someone who knows what is required to get by and someone who is an elite athlete, and who will do everything in their power to achieve their goals.”

"The entire week was awesome, I learnt so much! I wish I was able to do it again. It was a privilege to work with such great people."

Nicole Summerfield agrees: “The entire week was awesome, I learnt so much! I wish I was able to do it again. It was a privilege to work with such great people.”

She says the testing, in particular, was incredible.

“I think the one I found most interesting was working in the heat chamber and how our body's deal with the stress.”

As well as attracting high profile national media attention, the Academy has now become an internationally recognised event which highlights the prominent status the programme has achieved over the years.

“Many famous and now international Kiwi drivers have gone through the camp. It's a testament to the quality of the Academy and what you gain from it.”

Previous graduates of the Motorsport Academy read like a who’s who of the current crop of New Zealand’s leading drivers, from both Rally and Circuit racing disciplines. Past graduates include Brendon Hartley, Shane Van Gisbergen, Hayden Paddon and Emma Gilmour.