The University’s Caroline Plummer Fellowship in Community Dance has been enhancing the lives of both those who take it up, and those they work with, for a decade.

The Fellowship recently celebrated its 10th anniversary – with an international conference and a reunion dinner – with eight of the 10 former Fellows as well as Caroline’s parents in attendance.

The Bulletin Board takes a closer look at the Fellowship and its impact. 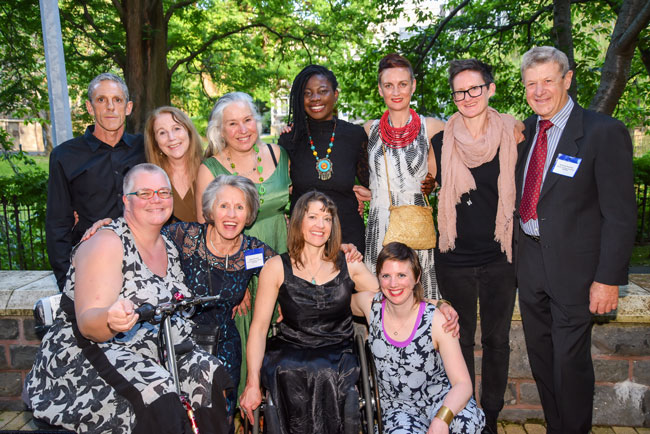 “Receiving the Fellowship was an incredibly important moment in my career as a community dance artist. Not only did it validate my preceding work but it also provided an opportunity to delve deeper into my practice and emergent philosophy.”

So says Katrina Rank, who held the Fellowship in 2007. Working with people over 50 years of age, her project focused on the ways in which people’s bodies remember ordinary and extraordinary movement.

Ms Rank is one of 10 people to have held the Fellowship since it was established in 2004, in honour of Caroline Plummer who had died the previous year.

The Fellowship acknowledges Caroline's outstanding scholarship at the University of Otago, her passion for dance, and her vision for community dance in New Zealand. Every year the fellowship committee accepts applications from around the world from a wide range of community dance practitioners and researchers. The chosen recipient is given an office and dance space, and not less than the minimum salary of a fulltime University Lecturer for a six-month period.

"Not only did it validate my preceding work but it also provided an opportunity to delve deeper into my practice and emergent philosophy."

Caroline completed a Bachelor of Arts in Anthropology and a Diploma for Graduates in Dance. While studying she was diagnosed and treated for cancer. She completed her degrees in November 2002 and was given a personal graduation ceremony in March 2003. She died on 28 April 2003.

One of her teachers, Ali East, says Caroline was a vibrant and intelligent young woman.

“She was full of positive energy and joy until her last moment.”

Although just 24 years old when she died, Caroline was very gifted and mature for her years, says her father Anthony.

“She held strong views from a very young age,” Anthony says. “Her cancer journey matured her further and she developed an amazing degree of wisdom for someone of her age.”

Her mother, Bibby, explains that the Fellowship grew out of two ideas.

“A few weeks before she died, Anthony suggested to Caroline we use her life insurance money to commemorate her passion for dance in some way. The very next day, Ralph Buck, then Head of Dance, suggested to Caroline we ask for donations in lieu of flowers to fund a scholarship in her memory. Caroline suggested we combine the two ideas, and overnight she scoped the concept for a scholarship. After she died, Ralph Buck developed the concept into a fellowship.”

The project was accepted as part of the Leading Thinkers initiative at the University, with the family and friends funding augmented by Government funds.

Caroline’s interest in Community Dance stemmed from her belief that everyone can dance and in the power of dance to promote health and wellbeing. Her vision was to ‘promote the role of dance as a means of fostering creativity, education, health, healing and peace within our community’.

"She held strong views from a very young age. Her cancer journey matured her further and she developed an amazing degree of wisdom for someone of her age."

The range of projects selected over the past decade reflect this vision – and the cross section of the Dunedin community that has been touched by the Fellowship is impressive. The participants have ranged from the St Kilda and St Clair communities (Lyne Pringle, 2011), support workers, carers and people with disabilities (Hahna Briggs, 2013), members of Dunedin’s cancer community (Barbara Snook, 2008), the sight impaired (Suzanne Cowan, 2010), and most recently, mothers and new babies (Uzo Nwankpa, 2015).

For those who have held it, the Fellowship has been a validation and an opportunity to reconsider their practice.

“It is a rare thing to have the time and space to do this in the general bustle of everyday life,” Ms Rank says. “There are usually so many distractions and calls on your time and energy. So for me, the Fellowship was the start of a new phase of exploration and adventure.”

The recent conference – Moving Communities – an international conference on community dance featured eight of the 10 former fellows as keynote speakers, as well as the 2016 fellow Val Smith and a range of talks by key international and national identities. It also included performed presentations by local practitioners.

The reunion dinner, held at the Staff Club, was a joyous and reflective event, honouring Caroline’s contributions to community dance.

"I could feel her presence when we were all together, invoking her spirit by mentioning her achievements, goals, passion and vision. I am sure she was gleaming with joy."

Ms Nwankpa says it was incredible to get together with so many of the former fellows – and believes Caroline herself would have been delighted.

“I could feel her presence when we were all together, invoking her spirit by mentioning her achievements, goals, passion and vision. I am sure she was gleaming with joy.”

Ms Briggs agrees: “I hope that she would feel proud and a sense of elation that her creation has taken on a life of its own.”

However it is her parents who should have the last word. When asked what Caroline would think of the Fellows and their work each year, their answer was simple.

“She would be absolutely thrilled, and more than a little humbled that it is all done in her name!”