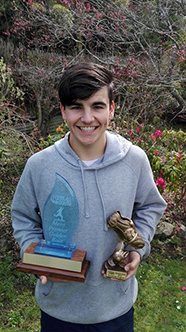 Tennessee donned his first football boots at the age of four. "I wanted to play because I got jealous of my older brother so I played in his team! I'm currently playing for Roslyn and played for Green Island for 5 years before that. I used to play other sports such as squash but now I pretty much just concentrate on my football. I'm trialling for Southern United, so if all goes well I'll be playing for them in the upcoming season.

I'm absolutely over the moon about winning the golden boot. It's something that I've aspired to since I was a wee dot. I remember looking up to the players in the premier teams and thinking how good they were so I'm stoked I've finally reached those shoes. At the moment I'm just taking football step by step and putting some hard work in and seeing where it takes me. The first step is to make Southern United and where it can take me from there.

I absolutely love my P.E degree. I've always been interested in physed and the students and staff are all so friendly and helpful so that makes the course enjoyable. My highlights definitely have to be our 3rd year Camp as well as the dance performance in 1st year. Both were amazing experiences that I otherwise would probably have not done.

Tennessee is keeping his future plans open. "I love coaching and next year I should be coaching at 3 to 4 football clubs and academies so I'm looking forward to that. Hopefully I can build on these once I've finished my degree."