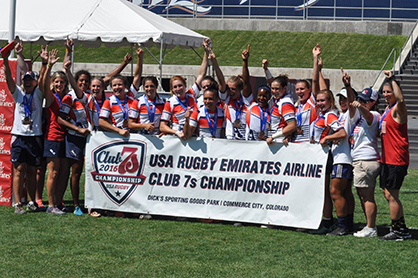 Michaela was recruited by a friend on behalf of the American Rugby Pro Training Centre (ARPTC) to impart her rugby knowledge and to play on an American circuit. Michaela says "They get girls from around the world to come and play and to help build woman's rugby."

Michaela currently plays club rugby for the University of Otago Women's rugby team ("Varsity") and from 2013 has represented Otago (Otago Spirit Women's rugby team) for both rugby 7s and rugby 15s so she was a superb rugby ambassador. It didn't take much persuasion for her to accept the opportunity! 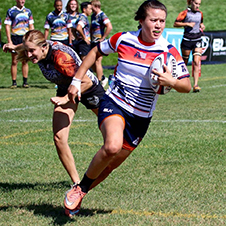 Michaela, who has been playing rugby for about 9 years, travelled to Dallas, Austin, Wilmington and Colorado playing in 7s tournaments to qualify for the Nationals. "The Cape Fear 7s at Wilmington was not a qualifying tournament but was one which had prize money and luckily we won it and got $2500 for the team which was awesome!" Her team made it to the Nationals which was held over 2 days in Colorado as the top seed for the Texas state by coming either 1st or 2nd at three qualifying tournaments.

"We smashed it the first day making it to finals games on the second day. However, we weren't on top of our game and unfortunately lost to a team we had won against previously in the semi-final (still sad about it). Overall we came 3rd at Nationals."

While over there Michaela lived in a team house with 10 other team members in Little Rock. Highlights for her was playing in the big Colorado Stadium, teaching kids at a summer camp how to play rugby, winning the prize money in Wilmington, the food choices and meeting all the people over there. "They were all so welcoming and I hope we cross paths in the future." She was able to enjoy downtime staying at one of her coach's lake house and doing all the water sports like biscuiting and jetskiing, and visiting Red Rocks national park in Colorado.

After finishing her degree at the end of this year Michaela says "I'm planning to earn enough money so I can travel the world, hopefully get another rugby contract and play rugby in Canada or Europe. After travel, I aim to get a job working with either Youth or Maori health services or finish studying with a year of teaching."