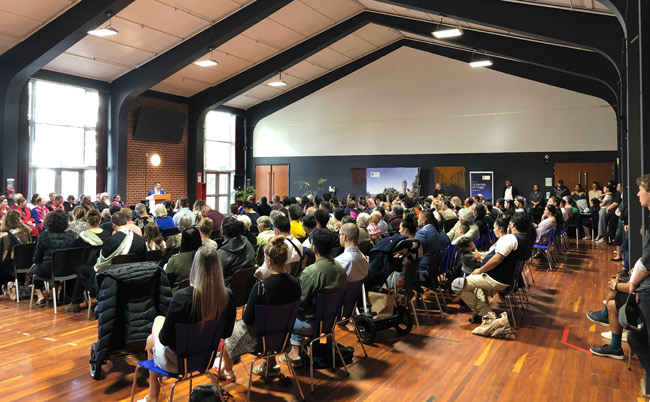 Attendees at one of two Māori pre-graduation ceremonies held in the Union Hall this month.

Emotions ran high at the University of Otago’s first Māori pre-graduation ceremonies of the year at Union Hall earlier this month.

More than 50 graduands across all four divisions were honoured for their achievements across two Friday afternoons at Te Heika Pounamu.

As with all Māori pre-graduation ceremonies, graduands and their whānau are given the opportunity to honour those who have provided support, reassurance and belief throughout their academic journey. The Health Sciences and Sciences Divisions graduands attended the first ceremony, followed by the Humanities and Commerce graduands at the second event.

Historic Te Koronga PhD graduand Chanel Phillips (Ngāti Hine, Ngāpuhi) addressed the gathering at Union Hall alongside 11 members of her whānau in the first of the two Te Heika Pounamu. When it came to her whānau’s address, her six-year-old nephew Tiaki-James Edwards gave a whaikōrero in support of his aunt.

"This kaupapa is foremost about the whānau in attendance both ā-tinana and ā-wairua. It is about celebrating their collective success."

“To watch my young nephew thrive in this environment filled me with so much pride,” the newly-crowned Dr Phillips says.

“The future is bright when our young kids can stand up in front of a large crowd of strangers and speak te reo Māori with confidence and pride.”

Among the group of graduands to address Union Hall in the second of the two Te Heika Pounamu was Bachelor of Indigenous Studies graduand Thomas Aerepo-Morgan (Ngāi Tahu, Waikato, Te Arawa, Kuki Airani).

Speaking in Te Reo Māori, Mr Aerepo-Morgan thanked those who had helped him along his journey and encouraged the younger ones to aim high and achieve more.

“I also want to mihi to my backbone, my rock, my kuia Hana Morgan who could not make it to my graduation,” he said.

The 2019 Māori Student Association Vice-President finished with a waiata and was supported by no fewer than 25 whānau and friends.

Reflecting on the ceremonies, Dr Phillips says the ceremonies provide an important opportunity for graduands to express themselves, their pride and their gratitude in a uniquely Māori way.

“At the heart of Te Heika Pounamu, it isn’t actually about the graduand, the University or the staff,” she adds.

“This kaupapa is foremost about the whānau in attendance both ā-tinana and ā-wairua. It is about celebrating their collective success.”