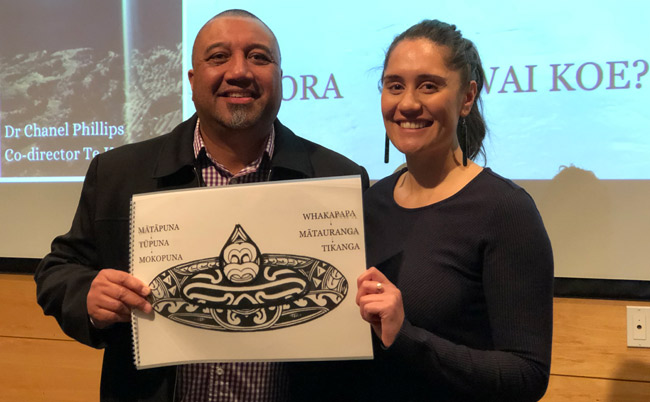 Water Safety expert Rob Hewitt and University of Otago researcher Dr Chanel Phillips at the launch of a Māori-centred approach to water safety on Friday.

A new resource highlighting a holistic, Māori-centred approach to water safety has been unveiled at a symposium focusing on Indigenous science research excellence in Dunedin.

Te Koronga is a Māori research excellence kaupapa at the University of Otago and is comprised of two parts: Graduate Research Excellence and Indigenous Science Research Theme.

"If we continue to use models and frameworks that do not reflect our views in, on and around the water, then they will continue to fail Māori."

“Māori water safety is about our rich and deep connection to water,” Dr Phillips told the Symposium during the launch.

“The current water safety framework and model is disconnected from Māori views. If we continue to use models and frameworks that do not reflect our views in, on and around the water, then they will continue to fail Māori. Wai Puna is an approach to water safety that is grounded in a Māori worldview and at that heart of this approach, is the importance of strengthening connection to wai (water). ”

Dr Phillips was supported by water safety expert Rob Hewitt, who earlier highlighted the importance of mātauranga Māori as part of a panel discussion on placing Indigenous science.

“Mātauranga Māori to me is about survival, how do I survive,” said Mr Hewitt, who spent more than three days at sea off Porirua’s coast in 2006.

“I was lost at sea for 75 hours. All of a sudden after two days, mātauranga Māori came to my life. It was a stage of wānanga, and the enlightenment from that.”

Mr Hewitt told the sumposium he was interested in disseminating Dr Phillips’ research in Australia as part of wider efforts to promote the connections between Māori and water safety.