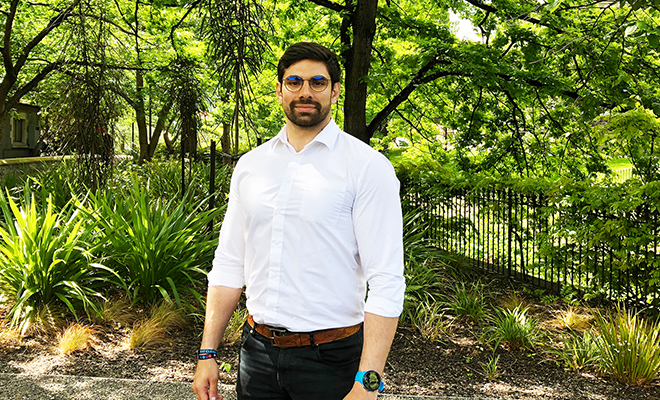 It was a box of documents on the 1981 Springboks tour stored in a farm shed in South Africa which would be the source of years of postgraduate research for Sebastien Potgieter.

Now graduating with a Doctorate on December 19, Mr Potgieter has just completed his fifth year of research on the Springbok Tour, first as a masters project in South Africa, and then for his PhD through the School of Physical Education, Sport and Exercise Sciences.

In New Zealand, the 1981 Springbok tour is often described as ‘nation-defining, and remembered for its polarising effects, violent and dramatic incidents, and as a broader marker of social and cultural change.

However, all that Mr Potgieter recalls hearing about the tour during his upbringing in South Africa was the infamous flour bomb incident Eden Park which came to define the tour.

With the ambition of a career in journalism, it was his undergraduate course in history and sociology at the University of Stellenbosch that eventually altered his study and career plans.

“For my masters in history I was approached to research the new area of sport history as the department had been gifted a massive archive of documentation on the Springboks tour that was found stored in a farm shed.

“It was only when I started going through all the articles, letters and correspondence that it became apparent what a huge event it was on so many levels, and that in South Africa we weren’t fully aware of what the tour had meant for New Zealand.”

After spending two years researching the tour, Mr Potgieter decided to pursue a PhD exploring how the tour had been narrated by New Zealanders over 40 years, and he made the move to Dunedin with the support of Professor Doug Booth, previous Dean of the School of Physical Education, Sport & Exercise Sciences, whose research was well-known in the field.

“When I started my research here, I was utterly astonished at how far reaching this tour was in New Zealand, as virtually any Kiwi can tell you some story about either their or a family member’s involvement in the anti- or pro-tour campaigns, and it had massive political, social, and cultural implications.”

What fascinated Mr Potgieter though was which ‘parts’ of the 1981 tour were consistently and selectively remembered, and in particular the predominant anti-racist and anti-apartheid aspects that remain the main narrative for which the event is remembered for today.

Mr Potgieter explains that this narrative was at complete odds with the accounts of those who participated in the anti-tour campaigns in 1981, and what they said they were battling against.

“Apartheid was a major factor in catalysing the tour protests, but anti-tour protestors treated it as more a critique of New Zealand society such as its imbedded and obscured racism, easily sanctioned violence, patriarchal masculinity reinforced through rugby culture, and a conservative government.

“However, the point is these broader ideas are no longer ‘remembered’ in the retelling of the 1981 tour.”

Mr Potgieter’s research shows that how we recall the past is not static and that selective remembrances which reflect the nation in a positive light obscure the more unpalatable parts of our past. He says it’s interesting to look at history and ask why we are looking at something a particular way and for what purpose.

“We have an event like 1981 but the way we write about it is constantly changing, so in effect while the past stays the same, how we recall that history is changing as we constantly evaluate it through the ideological lens of the present.”

Supervisor Dr Mark Falcous says the research sheds light on the complexities of how the past is remembered and contributes to debates regarding how New Zealanders like to see themselves.

“How the 1981 tour has been remembered has both changed and been highly selective, and that reveals several things including the shifting mythos surrounding the social role of rugby in New Zealand,” Dr Falcous says.

Mr Potgieter has now spent three years in Dunedin and says the sporting links between South Africa and New Zealand made the transition to live and study here an easy one to make.

Even after five years of studying the Springboks tour however, he is still not finished with the topic and is planning a follow-on book project to coincide with next year’s 40th anniversary of the event.

Mr Potgieter says that although it was disappointing to have December’s formal graduation ceremonies cancelled which meant his family was unable to watch the livestream from South Africa, the replacement events including the improvised march through campus exceeded his expectations.

“In a way, it was a fittingly unique ending to a very unique year. More than anything, though, it was a day of reflection as ten years of study came to a close. Much of the day was filled with sentimental reflection not only about the PhD research, but about the process that got me here.”