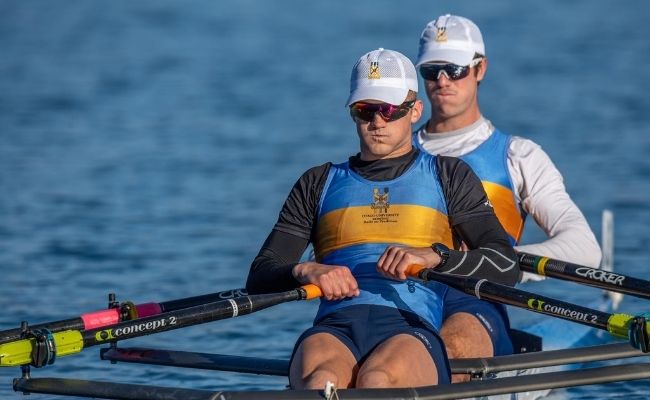 For two rowing students, the hard yards are reaping the rewards.

It’s no secret that the Otago University Rowing Club is the envy of many others and attracts top athletes from around the country, including Ben Mason and Kobe Miller.

The pair train together at the University and represent New Zealand on different teams. Bachelor of Science (Sport and Nutrition) second-year Kobe says both students took up performance scholarships here at Otago.

“It’s awesome here - there aren’t many places in New Zealand who offer an opportunity like this. I was offered scholarships overseas but Otago has something unique.”

“I get a lot of support from the rowing coaches. We have physiotherapist, a high performance gym, nutritionists and they’re very supportive of study. Not many other universities have that kind of thing. They’ve worked hard to get a good set up here.”

Kobe has had many successes in his rowing career so far, his most recent being offered a place in the 2021 New Zealand Under-21 Team.

“A week after the University Champs, eight boys were selected for the team and I was one of them. At Nationals this year I also received a national title in the premier quad.”

The Under-21 team is scheduled to race at the Trans-Tasman U21 Regatta in Sydney later this year.

Ben, who is studying Bachelor of Commerce (Exercise and Sports Science), also came away from the champs with an exciting new venture.

“I was selected to race at the World University Rowing Championships. For me, it's always very exciting to be a part of a national team. The team culture we have in New Zealand has created friends for life for me. It also builds a great training environment as we feed off each other, keep each other honest, push each other further whilst having a good time in the process.”

“The support we receive at Otago University Rowing Club has definitely helped me develop myself as an athlete. We have great equipment and resources to utilise and better ourselves with. I've also learnt how to balance a fun, educated and athletic lifestyle while studying here at Otago.”

While the successes are starting to roll in, both Kobe and Ben will say it hasn’t been an easy road to success and like many things, these are goals that are worth the work.

“Finding the balance can be a struggle but time management helps,” Kobe says. “There are heaps of opportunities to balance your time and the coaches are awesome, you just have to be focused.”