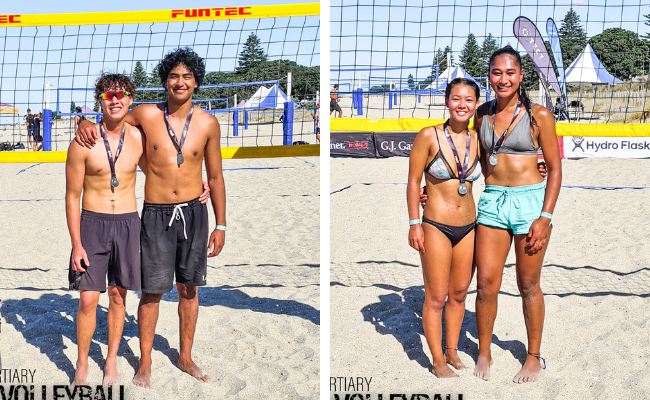 The ultimate summer plans involve days in the sun surrounded by golden sand and waves, which is exactly what was on the cards for teams attending the University Tertiary Sport New Zealand (UTSNZ) Beach Volleyball Championship.

The Championship was held at Mount Maunganui, Tauranga, and saw students from across the country arriving to compete for the top title.

“Sera and I came in second and the guys came in fifth which is pretty cool for Otago” Hikaru says. “In terms of the overall competition, placing counts towards the overall UTSNZ Shield.”

Among other representatives from University of Otago was Master of Sport Science student Will White and his playing partner, physiotherapy student Josh Watson.

“There isn’t really an Otago Beach Volleyball team so we organised this ourselves. The competition itself is pretty casual. We have crazy amounts of talent in Otago but we don’t see it so often, it’s definitely there so don’t be afraid to get involved,” Will says.

While this year’s competition has officially come to a close, there are still plenty of opportunities to get involved with Volleyball and other sports through UTSNZ and Unipol.