Recent discoveries in New Zealand archaeology have overturned long-held views about our past, and especially about the date of Māori settlement. New dating methods now show that the settlement of these islands by Polynesian ancestors of Māori occurred only around 1300 AD, not 800 AD as previously thought. This discovery effectively halved what was already a short pre-contact history, meaning that the dramatic changes to the way of life of the first settlers of New Zealand took place much faster than existing models allowed. Indeed, it now seems clear that a unique and distinctive New Zealand Māori way of life must have developed in a matter of a few generations, rather than a much longer time period of five or six centuries.

In order to explain how these early Polynesian societies changed so rapidly we propose a new 'rapid transformation' hypothesis for the settlement of New Zealand. We argue that on arrival in New Zealand, Polynesian communities attempted first to reproduce their tropical lifeways. This was successful for a short time while it could be supported by unsustainable economic practices but it soon collapsed with the extinction of moa and of a viable large-game hunting economy, and this resulted in a period of extremely rapid readjustment and transformation leading to the emergence of ancestral Māori culture. All this took place within a century or so of first settlement. 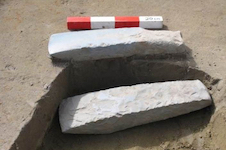 The first settlers brought with them a suite of material culture that included large, quadrangular adzes with a variety of cross sections, one-piece hooks and two-piece trolling lures for fishing, and distinctive necklaces of cotton-reel shaped units and imitation whale teeth. They lived in substantial villages from which they ranged all over the country on exploring and hunting expeditions. They brought several tropical food crops which they grew successfully in some parts of New Zealand. By the time of first European contact most of the artefact types had changed markedly, and there was considerable evidence for conflict, which included fortified pa and several types of weapon.

We know very little about the reasons for the changes, nor about the origins of the new material culture styles. What we do know, now, is that many of the changes occurred very early in the pre-contact sequence.

The First Hundred Years Project was initially funded by a Marsden Grant that took a detailed look at culture change in New Zealand during the first century or so of colonisation. We are continuing this research through a combination of methods which include excavation, radiocarbon dating, and detailed analysis of material from previously excavated sites.

The SPAR team are working sites from the first two centuries or so of Polynesian settlement. The aim is to identify trajectories of change during the transition from a tropical Polynesian way of living to one that was distinctly Māori. Two of the earliest sites we have investigated are the Kawatiri (Buller) River mouth site near Westport and Wairau Bar near Blenheim. At both sites we used areal excavation techniques to open up large areas that would allow identification of structures and the spatial relationships between activity areas. We also targeted midden deposits that contained evidence of early subsistence economies.

Three sites investigated that were occupied a century or so later were the Kahukura coastal settlement in the southern Catlins, near the southern tip of the South Island, and Cooks Cove on the North Island’s East Coast. Both of these sites showed evidence of early change in material culture, notably fish-hooks, and early change in subsistence economy.

A crucial part of this work is being able to place the changes we are seeing in time. We are using high-resolution AMS dating on materials that have been shown to be the most suitable for obtaining accurate dates. By combining large numbers of dates with statistical techniques such as Bayesian analysis we are able to refine our chronologies even further. We are already seeing improvements to our understanding of the settlement history of Foveaux Strait and the West Coast as well as Wairau Bar in Marlborough.

Wairau Bar is considered by archaeologists to be one of the most important archaeological sites in the country. It contains some of the richest and most diverse range of artefacts from what is now considered to be the colonisation phase of Aotearoa. Between 1939 and 1964 researchers from Canterbury Museum carried out a series of archaeological investigations at the site of Wairau Bar. This early work focused on the recovery of burials and artefacts. Subsequent excavations carried out by the SPAR team and the University of Otago in 2009 formally targeted evidence of structures and village life.

After a series of negotiations with the Canterbury Museum, in April 2009, Te Runanga a Rangitane o Wairau arranged for the remains of 41 individuals to be repatriated to Wairau Bar in April 2009. SPAR was invited by Rangitane mana whenua to assist with the identification of appropriate reburial sites and to carry out new archaeological research at the same time. 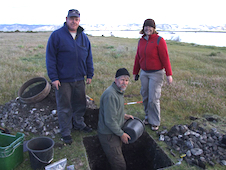 The first archaeological work was carried out in November 2008, directed by Professor Richard Walter, Chris Jacomb and Emma Brooks from SPAR. It involved carrying out a geophysical survey, using the fluxgate gradiometer, of the entire site. The fluxgate work was run by Hans Bader of Geometria. Ground truthing excavations were carried out to test the geophysics results. The excavations confirmed the validity of the geophysical survey and provided new information regarding stratigraphy and the patterning of cultural material across the site. The 2009 excavations at Wairau Bar confirmed that the site is considerably more complex than simply a burial site. A range of activities, including cooking and tool manufacture, took place across a wide area, with evidence of structural remains, a large stone-lined oven and faunal material indicative of a large village community.

The analysis of the Wairau Bar material is continuing in the University of Otago Archaeological Laboratories with many postgraduate students and research assistants studying the material under the supervision of Professor Richard Walter. In addition to standard faunal and artefact studies, the moa eggshell from some of the midden zones is being analysed for ancient DNA in order to build up our understanding of hunting practices in the earliest phases of New Zealand’s settlement.

More about excavations and repatriation of artefacts:
Wairau Bar blog