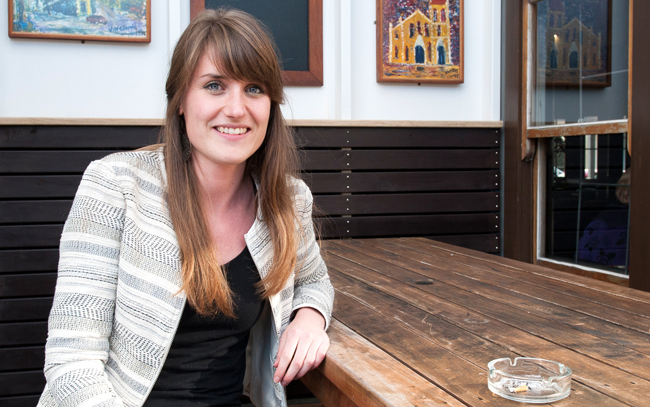 A study from the University’s Wellington campus suggests that tighter restrictions around outdoor smoking at restaurants may be needed to protect the health of both patrons and staff members.

The authors explored the potential for the drift of secondhand smoke from outdoor dining areas - where smoking is permitted - to the indoor dining areas of eight restaurants in downtown Wellington. Air quality in each setting was measured using two real-time aerosol monitors that detected fine particulates released by burning cigarettes.

Lead author Frederieke van der Deen says that although a future study with a larger sample of restaurants is warranted, the findings at least suggest that secondhand smoke drifts to the indoor dining areas through open doors and windows, and that this might particularly be a problem when the outdoor area is more enclosed, when smoking patronage is high, and during the peak of the summer season when all doors and windows are generally opened.

"In fact similar levels of secondhand smoke have been detected in hallways and near outdoor entrances where smoking is allowed."

“In fact similar levels of secondhand smoke have been detected in hallways and near outdoor entrances where smoking is allowed. Our research supports these findings.”

Although the issue has been found to be a problem in New Zealand pubs and bars, there has been no investigation to date of secondhand smoke drift in restaurants. It is important to study the potential for secondhand smoke drift in restaurant settings as a higher number of children might be exposed compared to pubs or night clubs, Miss van der Deen says.

“There is also potential for longer duration of exposure – throughout a meal, rather than while having a beverage”.

One policy option the Government could consider would be adopting fully smokefree hospitality venues, similar to a 25-foot rule in force in some USA jurisdictions, such as that in Washington State, she says.

“But, in addition, it is also important to increase awareness of the health risks associated with secondhand smoke for exposed non-smokers when sitting near an outdoor area where smoking is permitted.”