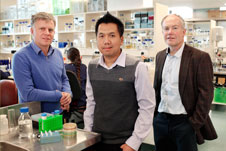 University of Otago researchers have been awarded $450,000 for research into the genetics of drug-resistant tuberculosis (TB) in Indonesia and Myanmar.

The recipients are Professor Greg Cook and Dr Htin Lin Aung of the University’s Department of Microbiology & Immunology and Professor Philip Hill of the Centre for International Health.

Their research project aims to identify the genetic basis for TB drug resistance in Indonesia and Myanmar, countries in which 6,800 and 9,000 resistant cases are estimated to occur each year.

Professor Cook says that determining as soon as possible whether a patient has a drug resistant form of TB is vital for effective treatment of their disease.

The traditional ‘gold standard’ method for diagnosing drug-resistant TB is known as phenotypic drug susceptibility testing (DST). However, it is a lengthy process that involves weeks of culturing a TB patient’s pathogen, exposing the culture to drugs and noting how it reacts, he says.

“In the meantime, there is no way to identify if you are treating the patient with the right drugs or not,” he says.

The research team will clarify the potential of an alternative method, known as whole genome sequencing (WGS), as a rapid and routine tool for DST and strain identification in Myanmar and Indonesia.

They will compare phenotypic DST results with results from identification of known drug-resistant gene mutations by WGS. They will then investigate any unexplained discrepancies and identify whether WGS has potential as a replacement or complementary test.

Dr Aung, a Myanmar-born postdoctoral researcher trained at Otago, says he is very honoured to be involved in this research project that could benefit his home country.

“Myanmar and Indonesia are affected by drug-resistant TB and rapid diagnostic tests are required to combat this global threat,” he says.

Another aspect of the research involves studying whether drug-resistant strains are passed on to household contacts as frequently as drug-susceptible strains.

Professor Hill says the project represents a great example of aiming for early adoption of the latest technologies in settings where they are needed most.

“It will also allow us to build on Otago’s established TB research collaboration in Indonesia by combining with Otago collaborators in Myanmar and also establish new collaborations with internationally leading infectious diseases researchers, including Professor Sharon Peacock’s group at Cambridge University, the Bloomsbury Research Institute in London and the Wellcome Trust Sanger Institute.”

The e-ASIA JRP initiates and supports multilateral joint research programmes in the East Asian region. It aims to develop a vibrant and collaborative research community in science and technology to promote innovation in the East Asian region, and contribute to the region’s economic development. New Zealand, via the Heath Research Council of New Zealand, is a member of the programme. Other members of the e-ASIA JRP include Cambodia; Indonesia; Japan; Lao PDR; Myanmar; Russia; USA; and Vietnam.