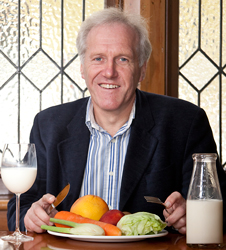 The Minister of Health’s announcement of the introduction within two years of a new test for cervical cancer to replace the current screening method poses a risk to “our well-established, high-quality” screening programme, say leading New Zealand experts and researchers in the New Zealand Medical Journal (NZMJ) this week.

The NZMJ editorial by a group of concerned specialists and researchers, including University of Otago Associate Professor and cancer researcher Brian Cox, says the group believes the National Screening Unit will recommend to the Minister of Health that the current screening test for cervical cancer be changed from liquid-based cytology to a molecular based human papillomavirus (HPV) test in 2018.

“We believe that while primary HPV screening shows promise....implementation in New Zealand in 2018 is premature and wrong. This decision could reduce the current level of cervical cancer protection and increase unnecessary referrals for assessment and treatment,” say the authors, led by prominent Dunedin cytopathologist Peter Fitzgerald.

“The potential for physical and psychological cost to women is unknown. Financial projections suggesting savings for the Government are optimistic and the proposed change may cost more. The public sector colposcopy (cervical cancer testing) services are currently stressed and unlikely to meet future demand without considerable extra resourcing.”

The article adds that there is potential for over-treatment using the proposed new system, and this could harm women.

“There is no debate about whether or not there will be extra colposcopy referral, diagnostic biopsies and treatments as a result of primary HPV (testing) compared to current cytology screening. The debate is only around how much extra and whether the New Zealand health service can cope with the increased demand for these services,” the authors say.

“Without a considerable increase in already stressed colposcopy resources, waiting times for colposcopy are likely to increase considerably when HPV testing is introduced. Because of this, we believe it is possible the primary HPV new screening algorithm may cost the Government more than it currently spends on cervical screening.”

They believe that the uncertainty and transition-risk could be avoided by co-testing with both cytology and HPV screening.

The recommendation to change the system in New Zealand was based on international clinical trial evidence and population-based modelling, but there has been no data available on this new method of HPV-screening’s performance in national cervical screening programmes.

“Where practicable, health service observations of the effects of potential changes in screening policy are strongly advised…. (in New Zealand) the safety of HPV testing at extended screening intervals is not certain,” the article states.

The other authors listed on the NZMJ Editorial are Senior Lecturer in the Department of Pathology at University of Otago, Christchurch, Dr Andrew Miller; Policy Analyst and Researcher for Women’s Health Action, Dr Sandy Hall, of Auckland; and Associate Dean of the Dunedin School of Medicine, Associate Professor Jim Reid.