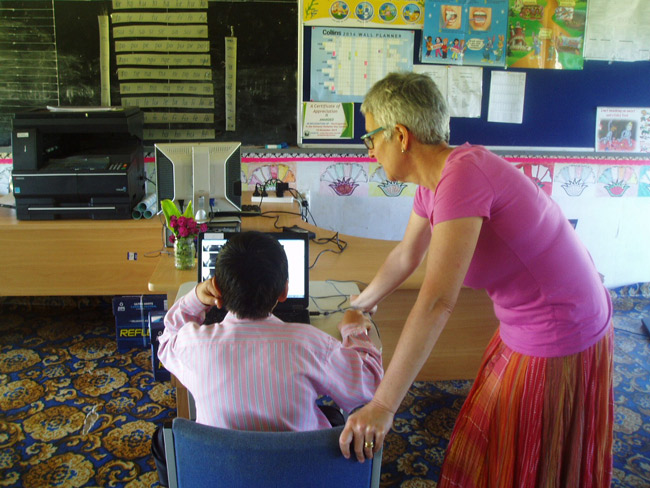 University of Otago research fellow Moira Smith works with a child from a school in Tongatapu in Tonga. The children examine the images recorded on their cameras before researchers look at the photos, so the children can remove sensitive images they may not want the researchers to see.

Researchers from the University’s Wellington campus have started working with camera and GPS-wearing children in Tonga.

The cameras the researchers ask the 11 to 13-year-olds to wear automatically take images of the children’s surroundings from their perspective every 10 seconds for three days of the week – Friday, Saturday and Sunday.

“The aim of Kids’Cam Tonga is to explore Tongan children’s environments, their interaction with those environments, and the implications for their health,” says research fellow Moira Smith, who is Deputy Director of the Health Promotion and Policy Research Unit, in the University’s Department of Public Health in Wellington.

University of Otago research fellow Moira Smith prepares to hand out equipment boxes — each containing a camera, GPS recorder and plugboard — to six Tongan school pupils. The children have the items for three days then researchers download and save the images and GPS data.

From now until November, the researchers will work with 108 children from 15 schools in Tongatapu and Ha’apai in Tonga.

Findings from the study will provide useful insights for health promotion interventions and public health policy.

The research, funded by a University of Otago grant, repeats the successful Health Research Council funded Kids’Cam project https://diet.auckland.ac.nz/content/kidscam conducted in Wellington in 2014-15.

It was believed to be one of the first projects in the world to use those technologies to explore children’s environments, and involved 169 children in Year 8 at randomly selected schools in the Wellington region.