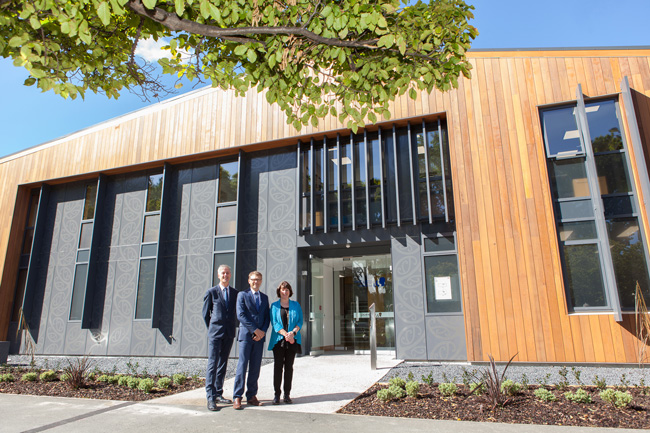 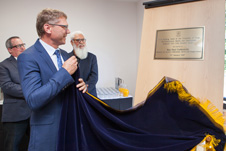 Tertiary Education Minister Paul Goldsmith unveils the plaque for the new building while Head of the Department of Psychology Professor Mike Colombo and University Kaumātua Hatarei Temo look on.

The Universityof Otago’s world-renowned Dunedin Multidisciplinary Health and Development Study has settled into a new purpose-built home ready to begin another round of testing as the first of its cohort of Study Members turns 45.

The new building, on the corner of Union Street and Anzac Avenue, was officially opened by Tertiary Education Minister Paul Goldsmith last month, and reflects not only the importance of the Study to the University, but also its national and international significance.

The Study has closely followed the progress of more than 1,000 people born in Dunedin in 1972 and 1973. It has produced over 1,200 publications and reports, with many of them influencing policy-makers in New Zealand and overseas.

"Against this backdrop the new building is like the icing on the cake – just great."

“We have started a functional MRI study that will continue over the next three years,” Mr Hogan says. “This is going to create a unique dataset – the largest set of brain scans on a birth cohort in the world. We also have a large group of new staff about to join us for training before beginning our next assessment phase in April as the Study Members start to turn 45.

“In addition, the Study has featured in a recent documentary ‘Why am I’ the Science of Us which has raised public understanding about what the Study Members have contributed, and is also being celebrated in an extremely popular exhibition at Toitu Otago Early Settlers Museum.

“Against this backdrop the new building is like the icing on the cake – just great.”

Mr Hogan says the history of housing for the Dunedin Study has been long – beginning 45 years ago with Study creator Phil Silva renting rooms behind Knox Church. 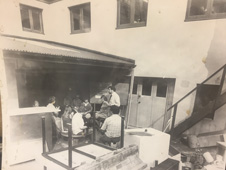 The Dunedin Study's former home in the Barningham Building.

A decade later, space was found at the Barningham Building behind the Dental School.

“This building was not considered flash even then,” Mr Hogan laughs. “Phil wrote to the Otago University Newsletter of the time to announce the Study’s new location:

Thank you for the 1985 newsletter. I note on Page 2 that the Pharmacy Department is moving from the ‘cramped confines of a decrepit old building behind the School of Dentistry’. It is with great pleasure that I wish to inform you that the Dunedin Multidisciplinary Health and Development Research Unit is moving into that building on 28th February!”

Staff cleared, cleaned and painted that building, which, although intended to be temporary, became the home of the Study for the next 30 years. Recently, with the redevelopments at the Dental School, the Study spent a year at the University Oval, before finally moving into its new building last month.

A building for the future

Its design keeps the Members of the Study first and foremost in mind. Every few years they return from all corners of the globe to be assessed. Their day of intensive interviews and testing covers every aspect of their lives and wellbeing, from mental health to cardiac fitness and respiratory tests. 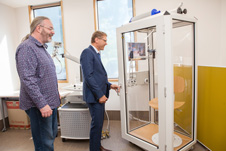 Because their identities are never revealed, the Study building has a private entrance, private parking, and a discreet street façade. The ground floor is dedicated to research, and includes interview rooms and specialised testing areas. The first floor is for offices and meeting rooms for researchers and support staff.

“We have done our best to carefully design the ground floor research space to be as useful and flexible as possible to future proof it against likely and expected assessment needs in the future. But we have done that in a style that is fitting for the Dunedin Study – so there are no high ceilings or traditional University feel to these spaces,” Mr Hogan says. “Murray Goldfinch, Otago University Strategic Architect, designed the space to meet our simple but unique needs.

"The building is beautiful to look at but feels homely inside."

“The building is beautiful to look at but feels homely inside. This really should let us gather some of the most complete data on our Study Members both at this and future phases and means that now, perhaps for the first time, the environment for the Study Members matches the incredibly high standard of research data they provide freely when they visit us.”