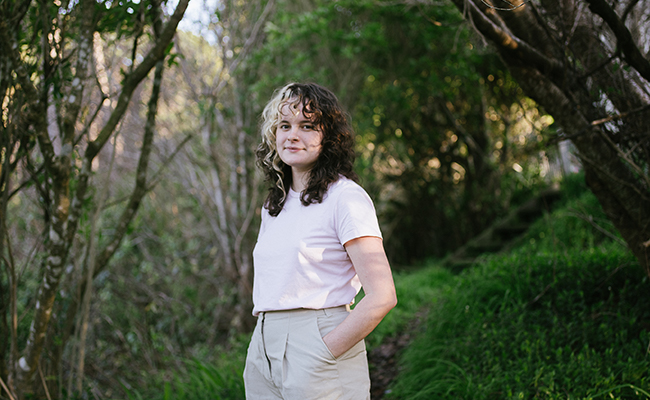 For Brodie Fraser the hardest part of completing their PhD was how personal their topic was to their lived experience.

Brodie graduates in absentia on 21 August with a PhD in Public Health from the University of Otago, Wellington after completing their thesis “We Can’t Find a Safe or Secure Environment to be Ourselves: Takatāpui/LGBTIQ+ homelessness in Aotearoa New Zealand”.

“Interviewing people was my favourite part; being trusted with their stories was something I will never take for granted. I feel so lucky and it’s something I really cherish. I hope I’ve done them justice.”

Brodie grew up with a single mum in their early years and while they grew up with heaps of love and support from their mother, at times they felt everything was against them successfully navigating academia.

During their teen years they discovered activism and attended their first protest following the Christchurch earthquakes when then-Minister of Education Hekia Parata tried to close and merge many schools, including the one they were attending at the time. At the same time Brodie was attempting to start a support group for LGBTTIQA+ youth.

After being told by a friend He Kāinga Oranga had a fully funded scholarship for someone to conduct research into Takatāpui/LGBTIQ+ homelessness Brodie applied and was offered the scholarship.

“A dear mentor at the time remarked how lucky I was to have the funding to pursue a heart project; the perfect combination of my academic and activist interests. He was, and remains, correct. It’s a privilege.”

For Brodie, the desire to push for greater acceptance for Takatāpui/LGBTIQ+ communities comes from being a part of the community themselves.

“I became estranged from my biological father after coming out (for a few different reasons, but that was a big part of it) and so I still have a deep desire to make sure everyone feels safe and welcomed when they “come out” – ideally I would love for us to not have to “come out” at all.”

Brodie’s thesis found that experiences of Takatāpui/LGBTIQ+ homelessness are shaped by: multiple failures of support and intervention points; the necessity of survival restricting choice and agency; and the long-term effect of concealing identities and coping with shame, stigma and trauma.

Understanding the experiences of the community’s homelessness demands a focus on and across systems and institutions.

One reflection of this love and support is when one of Brodie’s participants left care packages on three different occasions at the Department of Public Health.

“They were still pretty poor at the time I interviewed them but left me three boxes full of food and other necessities. The first note I kept; there’s a copy of it in the opening pages of my PhD and I have the original framed at home. Such incredible generosity and thoughtfulness.” 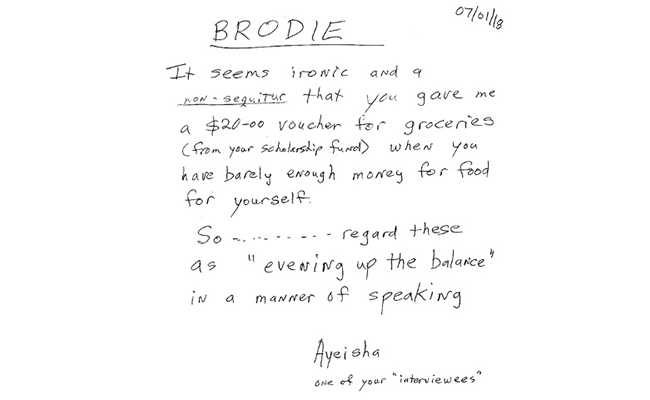 A note from one of Brodie's interviewees: "Brodie, it seems a bit ironic and a non-sequitor that you gave me a $20 voucher for groceries (from your scholarship fund) when you have barely enough money for yourself. So... regard these as 'evening up the balance' in a manner of speaking."

While the research they were doing for the community was incredibly important, it did not come without a personal toll.

“The hardest part of my PhD process was how incredibly personal it was. I grew up poor, neither of my parents are university educated, and I’ve moved upwards of 30 times.”

Brodie realised while doing their research that some of their own experiences could be classified as the “softer” end of homelessness, for example living with friends and family.

“I still don’t really view them that way, to me they were just stressful and unsettled times but not that bad in comparison to what some go through!

“But it all really connected me to the data; there were so many commonalities between my interviewees’ experiences and my own. I feel really privileged and proud to have made it this far, and I definitely carry my interviewees’ stories with me still.”

Brodie believes there are many changes needed to be made to combat Takatāpui/LGBTIQ+ homelessness in Aotearoa, including: social service organisations (both government and non-government) to be comprehensively trained by Takatāpui/LGBTIQ+ organisations in Aotearoa, census questions asking about sexual orientation and gender identity, better legal protections for the Takatāpui/LGBTIQ+ community and for the Births, Deaths, Marriages, Relationships Registration Bill to be updated so transgender and gender diverse people can more readily update their identity documents.

As Brodie prefaced their thesis: “Ending and preventing Takatāpui/LGBTIQ+ homelessness in Aotearoa New Zealand will take work. It will be emotionally taxing, difficult, and long; even just the process of researching and writing such a personally relevant thesis has been one of the most emotionally difficult things I have done. However, I still have hope—however naively that may be—that we can do this.”

Brodie starts a position at the University of Otago, Wellington as a Postdoctoral Fellow researching Takatāpui/LGBTQI+ peoples' experiences of housing stability more broadly in the coming months.