On Friday, 5 July, Patron of the Sir Peter Blake Trust and the Governor-General of New Zealand, Sir Jerry Mateparae, announced the Young Blake Expeditions were launching a series of expeditions to the Southern Ocean and Sub-Antarctic.  The first of these voyage is planned to the Auckland Islands in February 2014.

The expedition team includes 12 student voyagers and 14 more-seasoned crew including Sir Peter Blake Trust members, scientists, educators and science communicators.  Two members of the team are from the School of Surveying;  Emily Tidey is the expedition's hydrographic surveyor and Greg Leonard will be undertaking engineering and land surveying work in support of the establishment of a new scientific research station to be constructed in 2015.

You can find out more about this expedition on the Sir Peter Blake Trust website.

Regular news updates will be provided as the expedition unfolds.

Here is a photograph of the student voyagers taken at the expedition's launch on 5 December 2013. 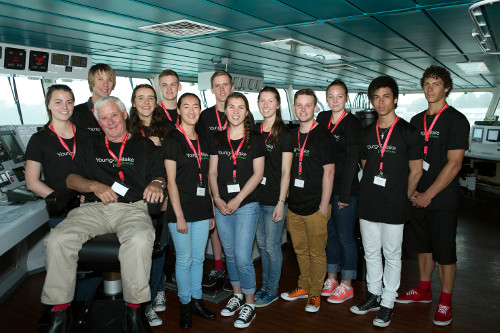