This is the first instalment in Dr. Chris Pearson's weekly updates on his field work in Nepal.

Well I guess it is time for my first weekly update from Kathmandu. I arrived not much the worse for wear having been able to sleep almost all the way from Auckland to Singapore. The first order of business was to get in contact with my hosts at the Nepal Survey Department to arrange the time I turned up the next day only to find that Tuesday was a holiday, Oops! So I spent Tuesday meeting the New Zealand Honorary Consul and some of the other folks working on MFAT funded aid projects which was very interesting. They are all civil engineers providing a crash course on earthquake engineering so I learned quite a lot about the damage the quakes caused. After that I spent the rest of the afternoon getting a Nepal sim or my cell phone which proved to be a bit more of an effort than I expected, involving, among other things, a passport photo.

The next day (Wednesday), I left the hotel bright and early and turned up at a bit after 9 only to find that the work starts at 10 am. Oops again!
After that rather unpropitious start, things have gone very well. On Wednesday I had spent a very productive day with Niarj, my primary host at the Survey Department, where I learned a lot about how the geodetic section does business and I certainly learned that some of my ideas were not going to be feasible, but I was also impressed with the amount of geodetic infrastructure they have, including a 29 station functional CGNSS network. The next day I ended up giving a presentation to their top management including the director general and it seemed to go very well with a lot of insightful questions. The upshot is that I am now working with Niarj to develop a proposal for a dynamic datum for Nepal. It would be a great thing for Nepal if it gets through. I have managed to do a bit of science also resulting in a much more accurate velocity field than we had before, but I will say more about this next week.

There were a few other surprises, like the fact that people in Nepal do not take lunch breaks and Sunday is a normal work day, but there is one more adventure I should mention. The New Zealand High Commission (who is funding this) asked for a photo of me set in Nepal, which I did not have, so I decided to go down to Durdar Square tonight which is the famous temple district now sadly diminished due to the earthquake. Anyway a young Nepali obligingly took my photo and I found myself conducted around the area. However, to my surprise there seemed to be a meter somewhere, which after we finished (about 20 min), had reached something that sounded like the national debt of a small country. Some spirited negotiations resulted in my knocking him down to 200 NP rupees or about 1.50 NZD. This may seem a bit mean but a 20 minute taxi ride is 300 NPR, so I do not feel I was too cheap. I have attached the photo below. 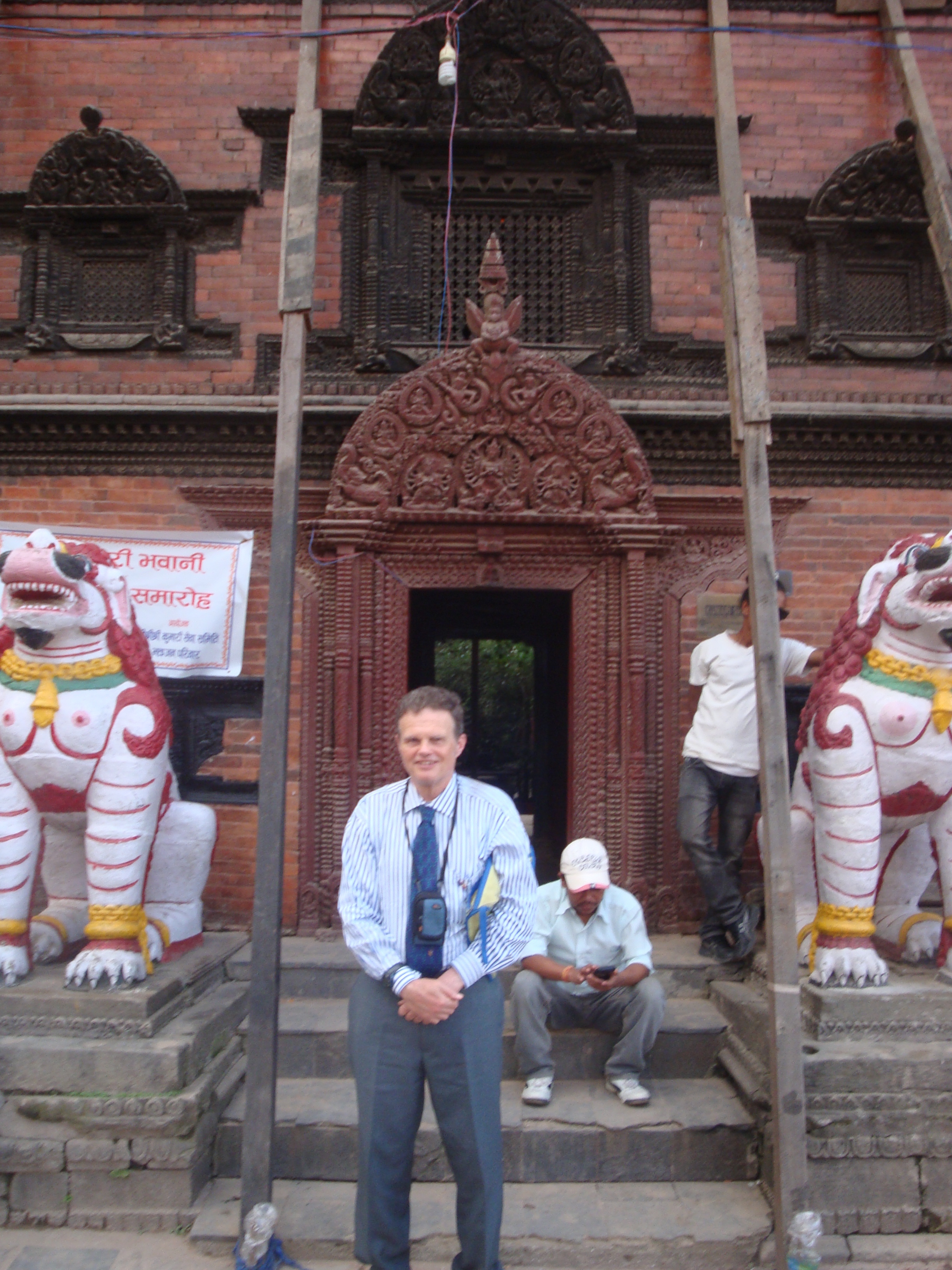