What a difference a week makes. This update was supposed to be about the Indra Jatra festival that occurred this Sunday. It was quite awesome and I will describe this at the end, but the elephant in the room has been ongoing fall out from Nepal’s new constitution. It turns out there was more opposition building to this than I realized last week both in lowland Nepal and the Indian Government, with the result that the Indian Border is now pretty much closed to trucks. This has made a big difference to me because the government vehicle that used to take me to work is now out of action. I managed to get a cab yesterday night but this is now difficult and very expensive so I have been reduced to walking. It is about 8 km each way or an hour and a half. But I guess I can’t complain, here I am getting paid for trekking in Nepal. OK it is not quite the Everest base camp but it still is better for you than sitting in a car in traffic.
By the way, the lines for petrol are unbelievable. When I was walking back from work tonight there were lots of vehicles waiting for petrol. They were backed up literally for miles. There were 3 lanes of taxis and one for busses and trucks. Another road which joined it had about the same width full of motorcycles. Otherwise things have gone on pretty well. I just finished a paper for FIG tonight with my host Niraj and our own Paul Denys. I had two interviews with different Kathmandu Newspapers, which is something I am not used to. I think things went well. I made sure that the survey department was represented. They both promised to send me links once the articles come out and I will attach them to subsequent posts. The other big thing this week was getting ready for the SNAP course that was suddenly moved up a week (yikes!!). Thanks to Peter Benfell and Chris Page for helping me get some files from the computer in a hurry.
Now enough of politics, let’s talk about the Indra Jatra festival. It is one of those things that really lives up to its reputation. I climbed the base of one of the temples that was destroyed in the earthquake (along with over a thousand other people) but luckily I got a really good vantage point to see the procession as it left the square. The three chariots (which are the highlight of the procession) passed right underneath me including one that carried the living goddess who was featured in the recent National Geographic article. Photos below. 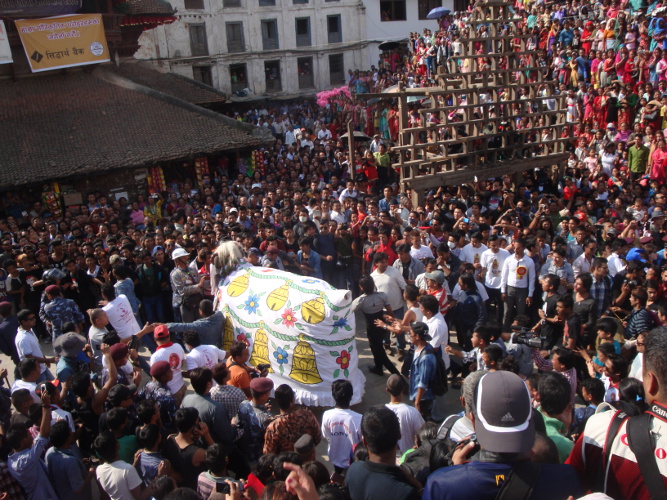 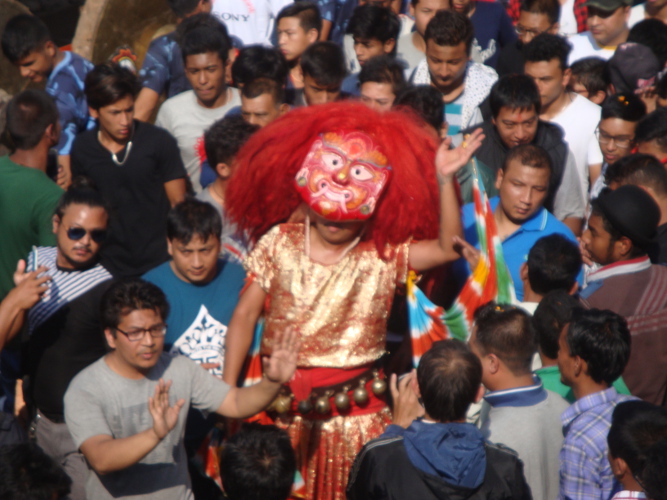