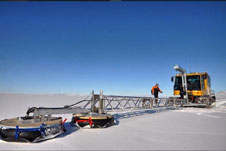 A University of Otago-led research team is about to embark on an epic Antarctic research expedition as part of efforts to better understand how the Ross Ice Shelf (RIS) will respond to global warming.

In mid-November, the team will drive tracked vehicles and snowmobiles 350 kilometres from Scott Base to a field site in a central region of the RIS, which is the world’s largest ice shelf.

A vehicle rigged with crevasse-detecting radar will be leading the way because the RIS, which is the size of France and hides an ocean of greater volume than Europe’s North Sea, is largely unexplored.

School of Surveying Dean Professor Christina Hulbe, who heads the RIS research programme, says “driving is the only practical way to get our research equipment, which includes a heavy seismic ‘thumper’, to the distant site.”

The team will follow the route established by an annual United States traverse toward South Pole as far as possible—then they “turn left” into uncharted territory.

The Otago designed and built thumper will provide a sound source for acoustic-based imaging of the seafloor and its sediment layers. Additionally, deep sounding radar will be used to study interaction between ice at the base of the RIS and the underlying ocean.

When they return next spring, accompanied by colleagues from other New Zealand universities, the researchers will use a hot water drill built at Victoria University of Wellington to bore through the ice to observe the ice/ocean interface directly, measure ocean properties, and sample sediments on the sea floor.

In subsequent phases of the four-year research programme the researchers will undertake similar studies at another site in the east of the RIS.

Team member Dr Christian Ohneiser says state-of-the-art techniques will be used to analyse the seafloor sediment cores enabling him to reconstruct the Ross Ice Shelf’s history since the last ice age. “We will use this reconstruction to test computer models of past change in order to improve models forecasting future change,” Dr Ohneiser says.

Professor Hulbe says the overall goal of the research programme is to understand the processes and process interactions in the whole ice shelf–ocean system that matter most for change in the system.

“We know that the past climate warming caused ice shelf and ice sheet retreat in the Ross Sea. Now we need to find out more about the actual physical processes and the rates at which they acted in the past. That knowledge is one of the keys to making better projections of future change.”

This shelf is a major interface between the West Antarctic Ice Sheet (WAIS) and the warming ocean. When the RIS responds to climate warming, the WAIS, which is already under threat from the Amundsen Sea region, is at even greater risk of collapse. That in turn would accelerate global sea level rise.

Four researchers from the University of Canterbury are also taking part in the expedition and will study snow accumulation and climate conditions the field site. Two Antarctica NZ support personnel, a field safety officer and a mechanic, will accompany the scientists. The team fly from New Zealand to Ross Base on 6 November and will begin their traverse, expected to take around three days, on 13 November.

They will spend between 7-10 days doing research at the site and will also begin work on a snow airstrip that will allow for air support and easier access to the site when they return next year.

The expedition team will have internet access at the site and use the social media app Instagram to post photos of their work. A National Geographic TV cameraman will film the team as part of a documentary series on Antarctic logistics.