I arrived in Kathmandu not too much the worse for wear and turned up at the Survey Department and everything seemed to get off to a great start. There have been quite a few changes in personnel including a new director with I spent an interesting half hour with, but everyone seems to be quite engaged. My office is in the geodetic survey branch which is great because it gives much better access to the people I am working most closely but unfortunately it seems to get short shift with resources. Both power (off for days at a time) and internet (likewise) are a bit of a challenge. It really gives me a better understanding of what our colleagues in the developing world have to put up with.
Well that was Tuesday, Wednesday it turns out was a holiday. Actually it was “public service appreciation day, and what is more, as understand it, it is only a holiday for public servants. Nice idea but I can’t imagine how that would go down in the US. On Thursday we went up to a Survey Department facility called Nargot. It is located about an hour and a half from the main office on the top of a large hill. The trip was ostensibly to check out a receiver that was thought to have been fired by lightening. It had. Note to self. Lightening protection is really important in the Himalaya. It is a pretty big monsoon this year and I have never seen thunderstorms like the ones they have here. Well it turns out the facility (which is quite large, 3 good size buildings and a staff of 8-10) is primarily to make routine astro measurements including some impressive equipment the like of which I have never seen before. So astro is still an important part of the geodetic system here. On Saturday , which is our normal I day weekend, I walked over to the Swayambhu World Heritage Site on the western edge of Kathmandu. It is far more impressive that I expected and well worth a visit if you have the chance. It is also the site of this week’s photo is taken in front of the Swayambhunath Stupa at the summit of Swayambhu World Heritage site. 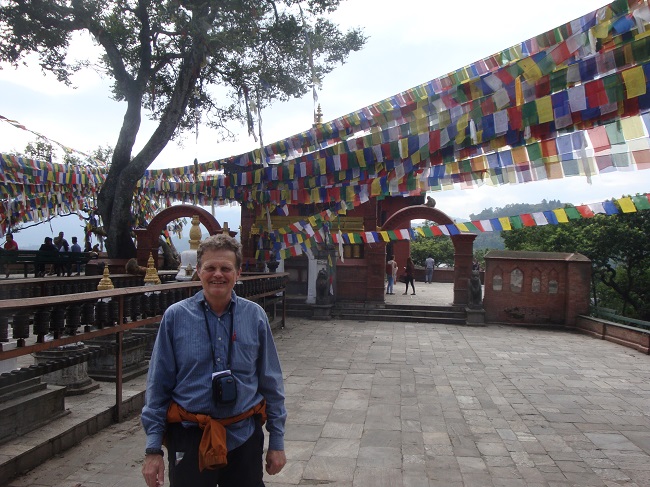