This work week was fairly short due to the presence of two holidays which left only 4 work days. However we were still plagued by a lack of internet at work so the holidays were quite useful since I spent quite a bit of time installing the PAGES GNSS processing package and processing baselines that we need as test data to finalize the deformation model. We developed a preliminary deformation model during my last visit but I was a bit concerned on how it fit the limited data that was available at the time. Earlier this year a new model was published and luckily we managed to assemble a much larger set of test data than I had last year, but how to process GNSS data. That is where PAGES came in. Downloading the program (at 1 GB) was a bit of a challenge however the IT support guy at the hotel was very helpful and we got there in the end. The result was that the new model was far and away better than the old one (the RMS reduced by a factor of 3!!). This is timely as the next phase of the project is to start adjusting the Nepal First Order control, but more about that next week.
Well I couldn’t let all of the holidays go by without some sightseeing (all work and no play and all that) so I managed to take a few hours off during the afternoons of two of the days. Olidays were for the first and last days of the Indrajatra festival. On the first day I went to the Kathmandu Durbur Square, where the festivities were being held but there was a very heavy police presence which I later found out was due to the presence of the head of state and other political leaders. Fair enough but it was difficult to get close enough to see much so I gave up after a couple of hours but on my way back to the hotel who should walk by but the elephant god followed by about a thousand very excited teen age supporters. I tried to get a photo but it mysteriously did out come out so I guess it was not meant to be. I have substituted a photo of a shrine that is only open during the festival I understand.
On the other festival day I walked over to Patan Dubar Square. I spent a couple of days there last visit but I was really impressed by the progress in repairing the earthquake damage. I am including Two photos here. One shows me in front of a newly repaired building and the other showing the main entrance to the royal palace. Note that the 3 central window in the top center of the photo is yellow while the other two are white. The two white ones (according to the Nepali Times) were replaced as part of the reconstruction.

Well that is enough for now. More next week. 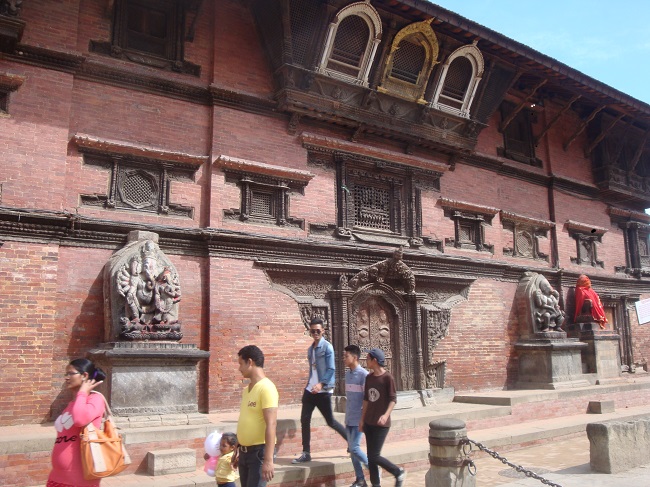