Massive survey of World War I tunnels handed over 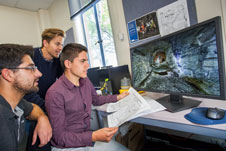 A highly complex University of Otago project to preserve the unique Kiwi character of World War I tunnels in France has reached a milestone.

Overnight (Weds/Thurs) New Zealand time, School of Surveying Senior Lecturer Dr Pascal Sirguey presented the city of Arras with the results of a massive survey of its historic chalk tunnels.

The presentation forms part of the 100th anniversary commemoration of the Battle of Arras in the far north of France.

The size of the project is mind-boggling. Dr Sirguey handed over three terabytes (3,000 gigabytes) of surveying data, which includes billions of survey points collected with a terrestrial laser scanner and accompanying animations of the tunnels.

Back at the University in Dunedin, final-year surveying student Damien Houvet from the École Supérieure des Géomètres et Topographes (ESGT) in Le Mans, is now working on another hugely ambitious plan - to turn the data into a three-dimensional “virtual” tour of the labyrinth.

When finished, this will allow anyone to make a “virtual visit” of the tunnels 15 metres below the surface. People will then be able to navigate in all directions, much like a video game.

The tunnel walls are covered in New Zealand names, sketches and other graffiti etched into the rock by soldiers in the lead-up to the Battle of Arras.

The Ronville network of tunnels links with historic chalk quarries and form part of a large underground military complex more than 2km long, named after New Zealand towns and cities, which was built from Arras under no-man’s-land and across to the German trenches.

They were secretly dug by members of the New Zealand Engineers Tunnelling Company in 1916-17 and at one stage were home to nearly 10,000 troops, with electric lights, water, kitchens and toilets, and even a light rail network.

Seven of the diggers were graduates or staff from the University’s old Otago School of Mines.

British troops used the tunnels to make a surprise attack on the German frontline. In World War II they were used as air-raid shelters by locals and were seen as possible nuclear fallout shelters during the Cold War. Access is now restricted and a museum has been built over part of the complex.

Dr Sirguey says the caves and tunnels hold huge significance for New Zealanders as a “permanent but unseen” memorial to the New Zealand Engineers Tunnelling Company.

During the main survey in July last year, postgraduate surveying student Chris Page and Mr Houvet used the latest technology to survey and record as much of the complex as possible “so that distance, time and decay don’t rob us of this memorial”.

School of Surveying colleague Richard Hemi, who has also been in Arras, says the tunnels are a “real, physical New Zealand monument”.

“It has a real New Zealand signature to it that, to a large extent, had been forgotten and not really well-documented. And this spatial documentation is a fantastic opportunity not only to preserve it, but to then lead on to that further interpretation of that story and history, in a very modern way.

“One of the things you can do with the virtual environment is start to add tags or keypoints, where you might be ‘walking’ along a hallway or a tunnel and there’ll be a numbered tag or box, and if you click on the box, like gaming for kids, information or a photo will come up.”

Dr Sirguey is currently in France (10 hours behind New Zealand Standard Time). If you would like to interview him about this project, please contact: