Hello and welcome to the third report from Kathmandu. Last week I mentioned I had two meetings that took up most of Public Service Appreciation Day and I promised to tell you about them in the next post. So here goes. The first one was with Iman Gurang, who was basically a Nepali working as a medical researcher in Cambridge and came back to Nepal about the time of the April 2015 earthquake. He developed a system to sort out the locations of emergency calls and send helicopters to the right location. Nepal has no system of addresses so everything is based on place names and, with a lot of foreign organizations involved in rescues with choppers going hundreds of km to completely the wrong location. Through this he became prominent and is now running a company developing the commercial side of the Nepal cGNSS array. A very interesting and entrepreneurial guy. The second meeting was with Lisa Choegyal the New Zealand Honorary Council in Nepal and a big supporter of my work here. I expected the meeting to be about my progress but we actually discussed the program to develop an updated height for Everest. It turns out that she and the NZ High Commission in India support this project and want there to be a New Zealand contribution, which is where I fit in. So keep your fingers crossed and watch this space.
Well I have spent quite a bit of time walking around Kathmandu on various errands, on the way to meetings or going to work. Kathmandu is a very dense city. During the FIG conference it was said that it was the densest city in the world by some measures. As I recall the speaker was arguing it was a bad thing but it does mean that it is a walkable city. Well except for the fact that you are on your own crossing many of the roads, and in the older parts of town there are no sidewalks. Pedestrians, motorcycles, cars and even trucks that you wouldn’t think would fit are all mixed together. Sounds like a recipe for disaster but because of congestion no one can move more than about 15 km/hr so it sort of works. And you get to see little gems like this communal water source. Common in Kathmandu and usually crowded with people doing laundry.
Last week was all about Indra Jatra, and I thought it was over after the return of the chariots however I spoke too soon. They actually had two other laps to make. I never saw the second one but I saw the results because they went right by my hotel and the top if the canopy of the big one managed to pull down a phone line phone line to the hotel which cut our internet for two days. Talk about withdrawal symptoms. I did see the end of the last lap however. I was just finishing tea when I heard a huge round of cheering from the square so I went and had a look only to see the chariots rumble into view again. Luckily this time I had the foresight to leave my wallet behind in the room because there was the normal crush of people and this time I was right in the front row - close enough to touch one of the small chariots and a little later I was just as close to the big chariot with Kathmandu’s living Goddess on board. I saw her being carried down from the chariot to a carpeted area where the living Goddess and the other two lookalikes were the center of a very interesting ceremony. Well that is the end of the Indra Jatra for this year. I saw workmen were dismantling the three chariots on my way to work the next morning.
There is one other thing I should mention. I showed the work on repairing the ancient temples on my first post but most of Dubar Square is actually occupied by a huge palace complex which once belonged to the King of Nepal. It is actually in two parts. On the eastern side is the ancient brick palace which was started by the kings of Kathmandu before the country was united in the 18th century and on the west side there is a more modern (19th century) white Italianate section. The Chinese are working on repairing the ancient brick section (by far the hardest job) while the Americans have the 19th century addition. Well the Americans have installed some banners emblazoned with the USAid logo along with a bit off scaffolding and that is about it. Not a workman to be seen. The Chinese (actually mostly Nepali workmen I think) are swarming all over their part of it. I will leave it to you readers to draw any geopolitical conclusions you wish. 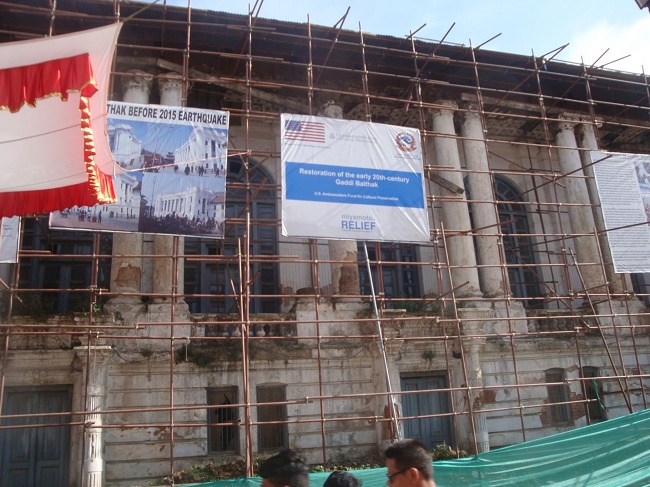 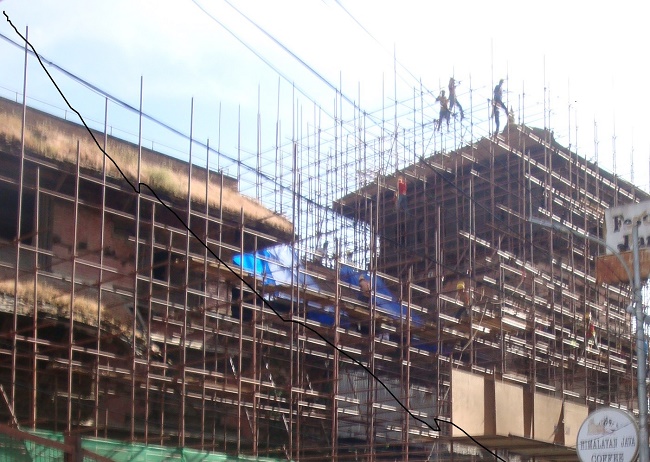 A street scene of a communal water supply. I believe they are used for washing but it can be a source of cholera if used for drinking, particularly during the Monson. 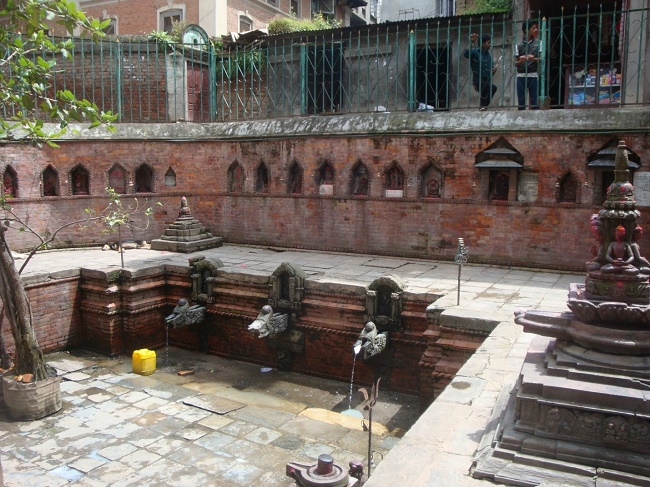