Hello and welcome to the fourth report from Kathmandu. This week the main thing that happened is that my wife Kathy arrived on Friday night. It certainly made a huge difference for me. I schemed about how to get to the airport to meet her by bus to avoid two taxi fares, and it turns out it is possible, the big green buses from Rtna Park go there and I was feeling cocky at his point because I had been riding buses for weeks at that point but I got one thing wrong. It turns out that the last bus is at 7pm. I missed it by 10 min, so it was a cab. A bit expensive but at 500NR or $5 US not too bad. The next day fortunately was Saturday (which is Nepa’s “one day” weekend) and since it was Kathy’s first day in Nepal, I had been saving Patan for this trip because it is not too far but it is one of the outstanding sights in the valley. Patan is one of the ancient capitols of the Mella Kings. It lost all of its importance as a government center after the Sha dynasty established the capitol of the united Nepal in Kathmandu so most of the old section was preserved. The old palace is now a museum. During my last visit it was partly closed due to earthquake damage but now it is fully open. We had a very pleasant couple of hours in the museum during which I finally got to the bottom of the “Holy Beer” mystery which I mentioned during one of my previous posts. The following is a direct quote from a poster about it. “During Indra Jatra, a popular week long festival, the Hanuman Dokah head of Bhairava (the vengeful form of Shiva which I showed as a picture in my second post this year) dispense sacred beer into the mouths of his devotees.” So there you are mystery solved. I can only add the observation that he had many enthusiastic young devotees. By the way, if you do go to the museum, don’t miss the café. We had a very nice lunch in a very pleasant environment well removed from the smog and chaos of Kathmandu.
As far as work was concerned, I said farewell to Puran ( the young survey officer who was helping me with the 1st order readjustment). The idea is to involve Neplai staff in the work so that they become familiar with the procedures and software and can carry it on without further intervention. It seemed to work well this year. Puran is going to Germany to work on his MSc and we hope he will use the readjustment project as part of his thesis. I also started developing a preliminary transformation grid by comparing the Nepal Everest coordinates of the first order coordinates to the new Nepal 2016 ones. Unfortunately there seem to be difficulties getting access to the database so I have had to go through the 1985 UK Army Engineers report (which established the Nepal-Everest datum). Unfortunately they use different names and there is nothing that is electronically searchable so it has been a frustrating and laborious exercise. Fortunately the results to date look good. 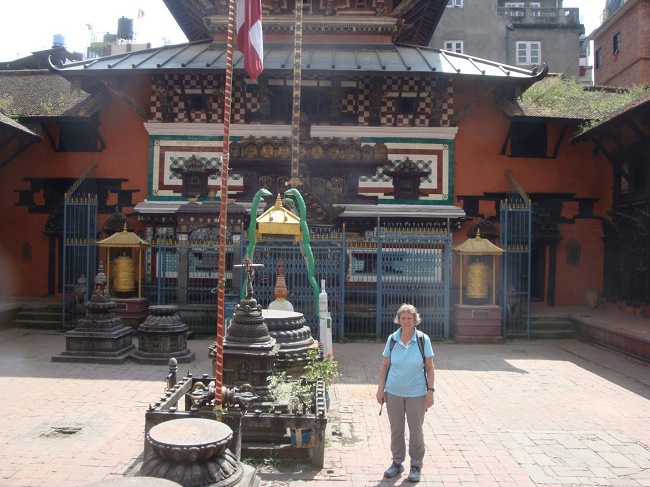 Kathy in front of a temple in Patan near the Dubar Square. 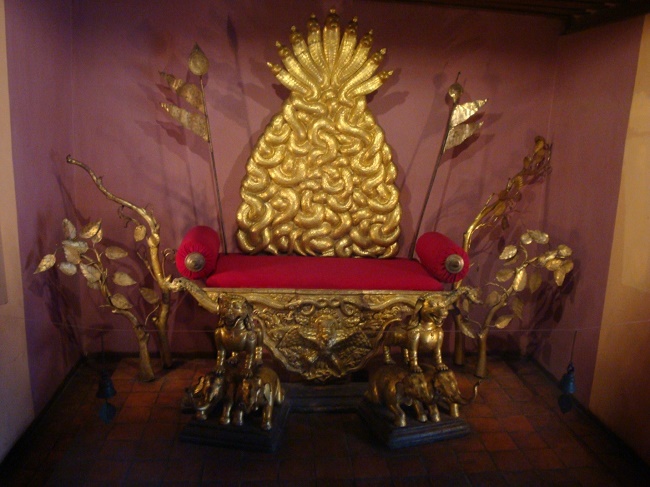 The 17th century throne for the kings of Patan. Amazing piece of Nepali metalwork but it must have been hell to dust.