US Ambassador keen to foster connections with Otago 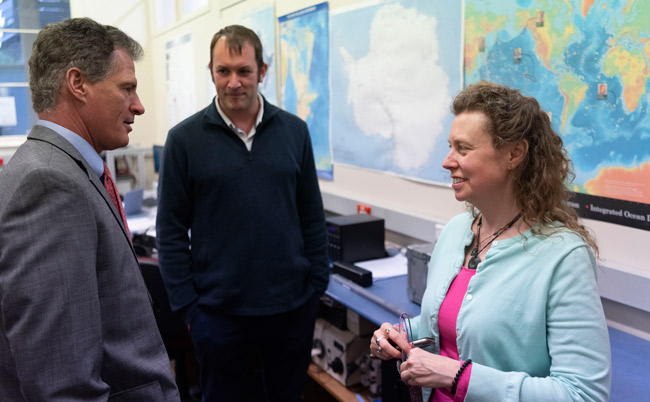 Climate change implications of the Antarctica work undertaken by Professor Christina Hulbe, the Dean of Otago’s School of Surveying, and Dr Christian Ohneiser of Geology was of particular interest to the Ambassador. Having visited Antarctica, Mr Brown understood the context of their work on the ice, and discussed interactions between the natural and human processes.

"The Ambassador was really keen to foster and strengthen connections with Otago, and this provided the opportunity to do that with someone who officially connects America and New Zealand."

“We do lots of collaborative research with US scientists, so it was great to make that connection with him,” Professor Hulbe told the Otago Bulletin Board following the Ambassador’s visit.

Referring to space as the ‘biggest area of opportunity’, Mr Brown was also personally interested in related research undertaken by the Department of Physics.

The Head of the Department of Physics, Professor Craig Rodger, says the Ambassador emphasised to him his personal interest in space and also the effort he is putting in to linking our countries.

One example is NASA’s recent announcement of a New Zealand Space scholarship supporting four internships at NASA for successful applicants.

Mr Brown also took the opportunity to meet a group of American students as Otago hosts over 600 US Study Abroad students, the most of any New Zealand university. There has also been a significant rise in the number of US students studying at Otago over the last five years.

Professor Barker says it was a really successful visit.

“The Ambassador was really keen to foster and strengthen connections with Otago, and this provided the opportunity to do that with someone who officially connects America and New Zealand.”