This report is primarily about the Dashain festival. Most of the festivals in Nepal are very colorful and public but this is very much a family focused festival. For many Nepal’s it involves a return to ancestral villages and can require very long journeys. I can personally attest that Kathmandu certainly empties out. This year Dashain started on Saturday and on Friday I gave my final talk to the management of the Survey Department. Actually it was right before quitting time similar to my situation at Kathmandu University the week before. It seems to have been my fate this trip to have held everyone up from their vacation. After that there was the normal Saturday “weekend” day off and 5 days of holidays. I used this time to get the readjustment of the 1st order network underway so I was stuck in Kathmandu for the entire period and I can attest to the fact that the city empty’s out to a remarkable degree and virtually everything shuts down. It was disorienting to see roads that are normally so congested that crossing them seems almost foolhardy are now totally empty. In order to get out and get some exercise I got in the habit of going for 1-2 hr walks in the evenings, usually to Dubar Square but sometimes further afield. On one of these outings, I was just passing a rather small temple on a back road about 1 km north of the square when suddenly a large contingent of army and police arrived and stopped traffic. Then a convoy of USV’s arrived and stopped right in front of the temple. I had no idea what was going on but through amazing good fortune I met a good friend form the Survey Department and he explained that the King of Nepal was coming to worship at the temple. As you know, the Nepal monarchy ended about a decade ago when the last king was murdered by a family member but, while this ended the political role of the royal family they still ceremonial role. Well this was all new to me but I got to see the king. Indeed at one point I was only about 3 m from him. On another of my expeditions I saw a long line of people waiting to enter the temple of the living goddess. I later found out that they were waiting for the goddess to apply a tika (red forehead mark) and blessing. On that trip I noticed an interesting restraint and resolved to come back the next night. It was a great idea. The hotel was the World Heritage Hotel on the north side of Dubar Square. It is a 300 year old house still in the hands of the original owners. I got a tour and (as you can see in one of this week’s photos) the full Dashain treatment. The red is of course a Tika and the green leaves is the Dashain grass.

Well, this is my last night in Nepal so I guess it is time to say what was achieved during my visit. I completed a major upgrade of the Nepal deformation model. This involved introducing a new velocity grid and a much improved model of the April 2015 Gorka earthquake. Was able to verify preliminary coordinates for 27 stations of the Nepal GPS Array cGNSS stations and I used both of these to make a preliminary adjustment of the Nepal 1st order network in terms of the new datum. This isn’t over. I will be back for at least a week in December so perhaps there will be another report then but this is all for now. 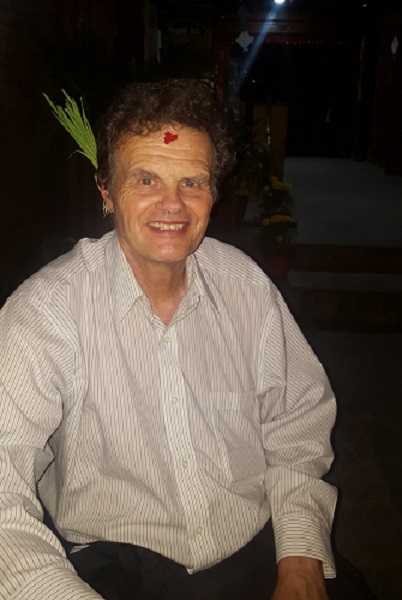