Hello dear readers (and I hope there are some) and welcome to the second report from Kathmandu. Happy Public Service Appreciation day. No I am serious. Can you imagine what Trump would do with something like this! It does not apply to me of course but all of the government departments are closed and so I could not go to work. Fortunately I had two meetings which took most of the day but I will tell you about those next week.
This week was all about Indra Gatra, which is one of the major festivals in Kathmandu. There were several public holidays and as a result I spent several days working at the hotel, however, the festival activities are all centered on Dubar Square and living right there, you can’t avoid being swept along with the festival spirit. Most of the activity occurs at night and every night there will be some festival activity underway. It is difficult sometimes to concentrate on work at hand, but this may not be the worst problem to have. The activity is not restricted to Dubar Square either. All of the minor temples have their own activities and all sport colorful decorations. The whole festival comes to a climax with the procession of the chariots which involves Kathmandu’s living Goddess. Actually there are three chariots. The living goddess rides in the largest and two others have ordinary children usually boys. I wasn’t sure I was going to attend this year but there was a huge monsoon downpour in the afternoon which ended at about 5 pm and since this was a day I was working at the hotel, I decided to see what I could of the end of the festival after work. At this point all of the prime viewing places were taken and the entire square was a mass of people so I decided the best strategy was to stand at the exit so I could see the performers as they left. It worked out spectacularly well because I ended up being within 1 m or so of the chariots as they left on their (roughly) 4 hr circuit of the old centers of Kathmandu. A few hours later I saw one of the smaller chariots after it had returned as I was coming back from dinner.
Oh there was one other thing. The Nepal Army came in to clear the way for the chariots and those guys do not kid around. We all got quite squashed and unfortunately I left my wallet in the outside pocket of my rain coat. After the chariots left and we had room to breathe again it had disappeared. I have always been amazed at how safe Kathmandu is given its size and 3rd world status but that is no reason to be stupid it turns out. Fortunately I had very little in the wallet but some credit cards and after an intense hour I managed to stop them both. Lesson learned (I hope).
Work-wise I finished incorporating the 2017 surveys into the Nepal national adjustment and working with Puran (a young survey officer ) developed a methodology to use LGO (their preferred software) rather than NGS’s Pages. LGO should be fine but unfortunately it is limited to 80 km for fixed baselines so you have to choose your stations with care.
Well there is only one choice for today’s photos - in honor of the festival. The first one shows a face of one of the Hindu gods. The face is usually behind gates that are only open during festival time. The face seems to attract a lot of young men who appear to be competing to drink the liquid coming from the pipe which extends from the gods mouth. The liquid smells suspiciously like beer. Holy Beer! What’s not to like? The second shows the chariot with someone dressed up as the goddess. I saw the chariot with the real goddess I could not get a clear picture. 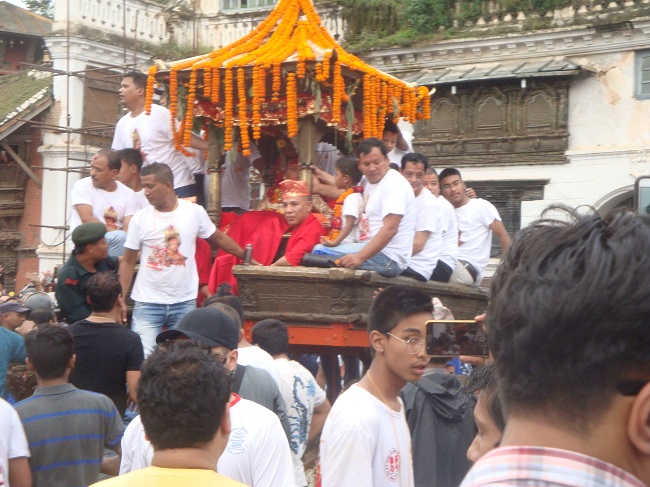 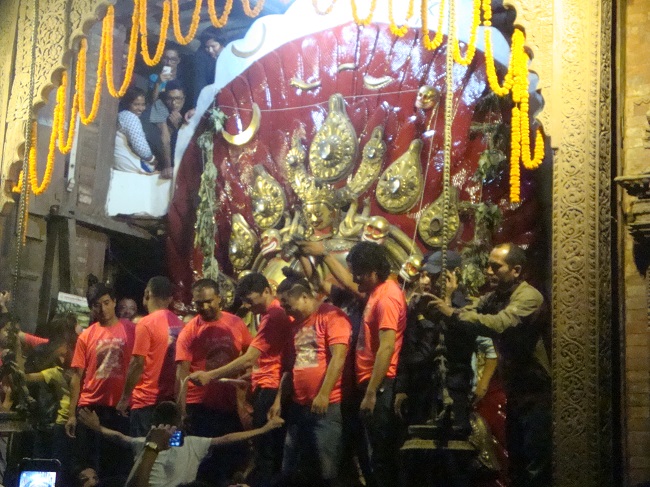