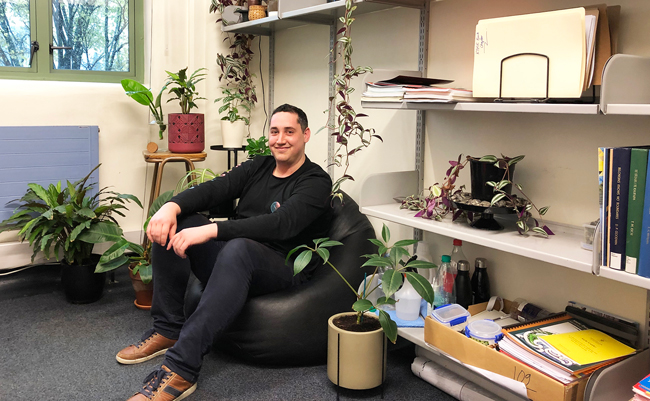 James Berghan (Te Rarawa, Te Aupōuri) is a PhD candidate in Surveying at the University of Otago and now a Lecturer in Urban Design in the School of Surveying.

After completing his undergraduate degree at the School in 2012, he worked in Hamilton to become a Licensed Cadastral Surveyor, before returning to Otago in 2017 to start a PhD.

Sciences Communications Adviser Guy Frederick caught up with James to see how this rural Northland tama became the first Māori academic staff member in the School of Surveying.

What is your whakapapa and what drew you to Surveying in the first place?

I whakapapa to the Muriwhenua tribes in the Far North of the North Island. Having grown up on a dairy farm in the Hokianga all my life, I was first drawn to surveying due to its association with the outdoors, as well as elements of maths and graphics. Over time, those interests have evolved a little, particularly as I learnt more about what surveying actually is! I still enjoy the graphics and creative components, but alongside other issues around land law, planning and notions of belonging and home.

Why did you return to do a PhD after several years working?

When I was working I never had the opportunity to stop and be able to think about what could be done better – I was supporting or perpetuating a status quo. I worked for a multidisciplinary company so I gained experience across surveying, planning and engineering which was really useful, but I also struggled with siloed structures. I like to have a big picture view, to see how things interconnect and to think perhaps a bit more deeply about what it is that we are actually doing, and the PhD allowed me the space to do that. I had kept in touch with my Honours supervisor, Dr David Goodwin and he let me know about a PhD opportunity that was funded through the National Science Challenge: Building Better Homes, Towns and Cities. The timing was perfect for luring me back to study.

What is your PhD research about?

My research is premised on papakāinga and how early communities lived in relationship with the environment and with one another. I worked with case studies in Auckland and overseas to capture the lived experiences of residents in modern developments which are emulating such features, which included urban papakāinga but also co-housing as well. During my PhD I was fortunate enough to visit the world’s oldest co-housing community just north of Copenhagen in Denmark, as well as others in Sweden and the Netherlands. I met a Māori woman in Copenhagen who had been living in a co-housing community for twelve years, and she could validate a lot of similarities between her experiences of living in that community to those of traditional pā living.

What drove your decision to become a kaiako in the School of Surveying?

Right now, I feel like this is the space where I am able to make a difference. I feel a sense of responsibility to be here, and to be visible as a ‘role model’ for other Māori who are considering their pathways. There is a saying, “you can’t be what you can’t see”. While I don’t entirely agree with the saying itself, if me being here can give just one student that confidence or boost to think they can give it a go, or if I can make their journey just that little bit easier, then it’s worth it.

As a profession, surveying has a lot of historical baggage too. Surveyors played a critical role in implementing colonisation, which as a Māori surveyor, makes for somewhat of an interesting internal conflict. But I’m a firm believer of changing things from the inside. I could go and work in private practice again, but out there I’m only one person. Here, I have the privilege of working with the next generation of surveyors. That’s a lot of sets of eyes.

What was it about urban design in particular that drew you to the role?

Urban design sits nicely with my holistic worldview and incorporates many disciplines including engineering, planning, psychology and environmental sciences. It also links to my interests in the role, influence and inter-relationships people have with the built environment that explores such questions as how places make us feel or behave in particular ways.

In what ways will mātauranga Māori guide your teaching and research?

To me, a key part of mātauranga Māori is understanding that there isn’t one way of knowing or thinking or being. I try to incorporate diverse content and methods to reflect that pluralism. For instance, we did an urban scavenger hunt this semester where students could choose which tasks they wanted to do, when they wanted to do them, and what format they wanted to submit their answers in. We’ve co-constructed marking schedules together. To me, these are ways, albeit small, for students to exercise their mana motuhake. I see a lot of value in shifting away from that traditional model of the teacher possessing all the knowledge. Learning is a two-way street (urban design pun intended).

In a similar vein, my research is grounded in principles of kaupapa Māori research. I’m constantly learning things about my taha Māori, and I am excited to keep improving and building cultural knowledge and relationships where I can. This can include awareness and being open to new approaches and other perspectives and ways of thinking.

It has been a big year to start your journey as a lecturer – how has it been for you and what lessons did you take from lockdown?

It’s been a challenging semester, that’s for sure. I was definitely not expecting to spend most of my first semester teaching from behind a computer screen! It was a bit of a juggling act, fitting in my PhD oral exam amongst teaching as well, but I think we made the best of what we had. I’m extremely proud of our students who stuck with it and were able to produce a lot of really high-quality work by the end of the semester.

To me, lockdown highlighted our ability to imagine a new normal. Whether that’s to do with the way we work, or about connecting with nature and with one another, or even what happens when we prioritise our streets for people. We can see it again with the Black Lives Matter movement, where we have the opportunity to imagine a new normal without overt/covert and systemic racism. It’s just whether or not we have the momentum to overcome that inertia of the status quo.