New ocean data from under the world’s biggest ice shelf 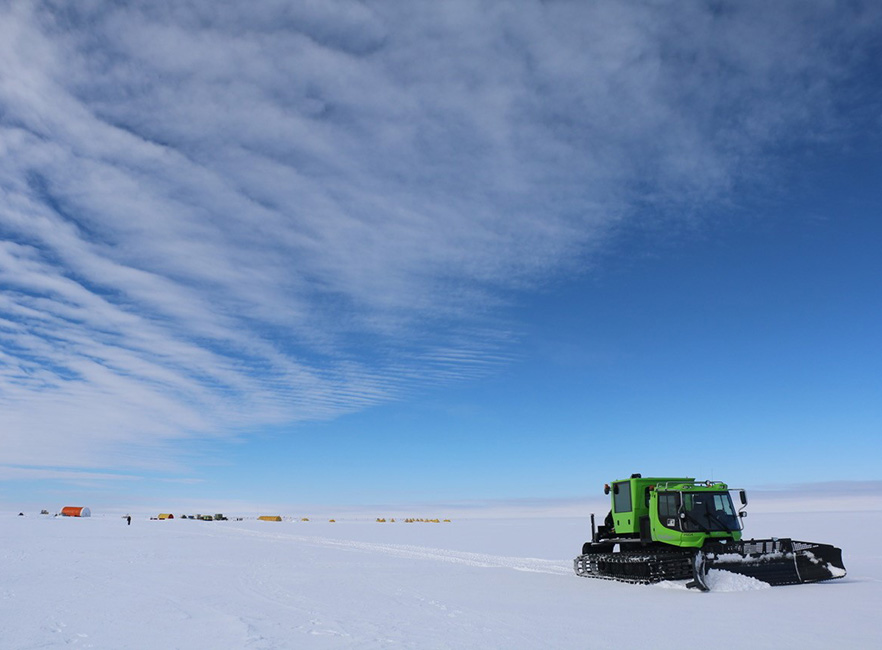 The team's field camp at 80.6 South in the central region of the Ross Ice Shelf. Credit Christian Ohneiser.

New measurements from the ocean under the centre of the Ross Ice Shelf have significantly improved our understanding of the complex processes that drive melting in Antarctica.

The measurements are the subject of a paper published this week in scientific journal PNAS: Physical Sciences. Lead author and NIWA marine physicist Dr Craig Stevens says this is just the second set of measurements taken from this area, the first having been completed in 1977 with much more rudimentary technology and over a much shorter timeframe.

Melting Antarctic ice shelves will be responsible for a large proportion sea level rise caused by a warming climate. The ice shelves mainly melting from below by the ocean but with so little data available about how that water mixes, that significance is often overlooked in climate models. Dr Stevens says the new measurements will help redress this.

The Ross Ice Shelf is the largest on the planet at 480,000 square kilometres. It is many hundred metres thick and more than 600km wide.

Dr Stevens conducted the ocean measurements during an expedition in December 2017 when a hot water drill bored 350m metres through the ice to the ocean below. Instruments were then lowered through the hole and left for two years to record ocean currents and water temperature with data transmitted via satellite. 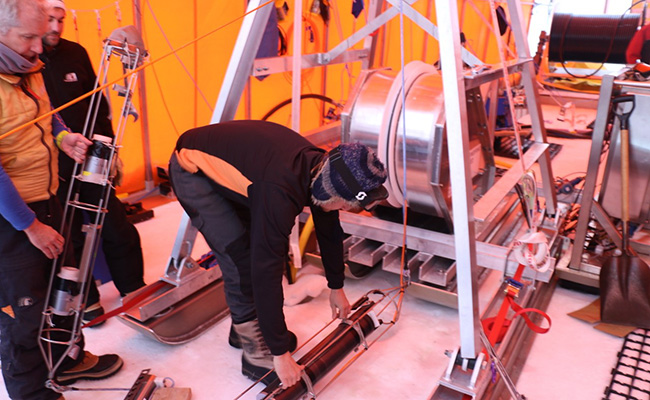 Inside the drilling tent. Mike Brewer prepares to deploy an instrument through the borehole while Craig Stevens and Dan Lowry help. Credit Christian Ohneiser.

Securing the measurements underneath hundreds of metres of ice 350km from Scott Base presented a massive challenge for scientists, but Dr Stevens says the information gathered emphasises the importance of carrying out these kinds of expeditions. Importantly it was a highly collaborative science expedition. It was led by the University of Otago and the drill team came from Victoria University and demonstrated how scientists from CRIs and Universities collaborate.

“We’ve been working toward this goal for a long time. Seeing it all come together in Antarctica was exciting, but it’s scientific results like this that make it all worth the effort” says Otago’s Professor Christina Hulbe, who leads the project’s scientific team.

Dr Stevens explains why the work is so important. “Future climate projections largely depend on the longevity of the ice shelves so it is important to see what has changed. Bringing together observed and modelled perspectives is critical for improving our predictions of ice sheet evolution and how that will impact the planet.”

He says the data collected, and comparisons with the 1977 data, provide valuable insight into the how the ocean circulates in the cavity under the ice shelf and the complexity of the processes involved.

Some key differences were observed between the measurements and those taken 40 years ago including salinity which reflects continent-wide changes. The team also observed short-term re-freezing on the underside of the ice shelf which Dr Stevens says has implications for the melt rate and the dynamics of the upper ocean.

“This new insight emphasises the importance of making these observations in the environment where they are taking place. These virtually unexplored areas are hidden from the sun and wind by hundreds of metres of ice and are subject to processes that we are not used to seeing in the open ocean.”

The next phase will explore how to integrate these new measurements into the climate models.

“We have dramatically lifted the amount of data available and provided a basis for better understanding the complex processes that drive melting.”