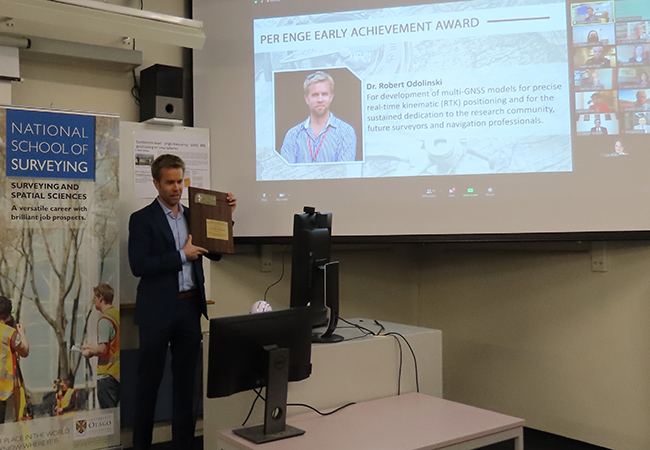 The Institute of Navigation presents Dr Robert Odolinski with the Per Enge Early Achievement Award. The Institute of Navigation (ION) presented its Per Enge Early Achievement Award to Dr Robert Odolinski during the ION International Technical Meeting (ITM) and Precise Time and Time Interval Systems and Applications (PTTI) meeting virtual held January 25-28, 2021. Dr Robert Odolinski was recognized for development of mult- GNSS models for precise real-time kinematic (RTK) positioning and for the sustained dedication to the research community, future surveyors and navigation professionals.

The Per Enge Early Achievement Award recognizes an individual early in his or her career who has made an outstanding achievement in the art and science of positioning, navigation and/or timing and is given in memory of Professor Per Enge, a brilliant engineer and teacher whoused his cheerfulness and enthusiasm to inspire others through education, advising and mentorship. 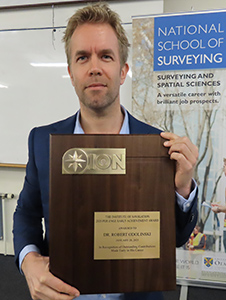 Dr Robert Odolinski has brought the study of precise positioning using multiple GNSSs to a worldwide audience. His 2014 paper, “Combined BDS, Galileo, QZSS and GPS single-frequency RTK,” has over 180 citations (Google scholar), as one of the most cited GNSS articles of its age. He developed a real-time kinematic (RTK) GNSS model that led to the feasibility of fast cm-level positioning using low-cost multi-GNSS receivers/antennas. This research was first to illustrate that such performance is competitive with that of survey-grade equipment. He was also first to illustrate the combined GPS and BeiDou (BDS) positioning performance in Australia. Dr. Odolinski has further been instrumental in the group effort of developing undifferenced and uncombined precise point positioning RTK (PPP-RTK) models at Curtin University.

Dr Odolinski serves as a member of ION and IAG. He is also a member of the Joint Study Group on Multi-GNSS Theory and Algorithms of the IAG and co-chair of two IAG working groups on Reliability of Low-cost & Android GNSS in Navigation and Geosciences and Ambiguity Resolution for Low-cost GNSS Receiver Positioning, respectively. He is a regular contributor to the ION programs. He has received several national and international research grants and has published over 30 papers. He is a member of the Journal of Spatial Science and GPS Solutions editorial boards.

The ION Annual Awards Program is sponsored by The Institute of Navigation to recognize individuals making significant contributions or demonstrating outstanding performance relating to the art and science of navigation.

Additional information about the ION can be found at ion.org