Research in Geodetic and Surveying Science at the School of Surveying covers the fields of earth or crustal deformation, geoid computation, Global Navigation Satellite System (GNSS) positioning, and long term sea level change. Find out more about the various disciplines in which the School is involved below. 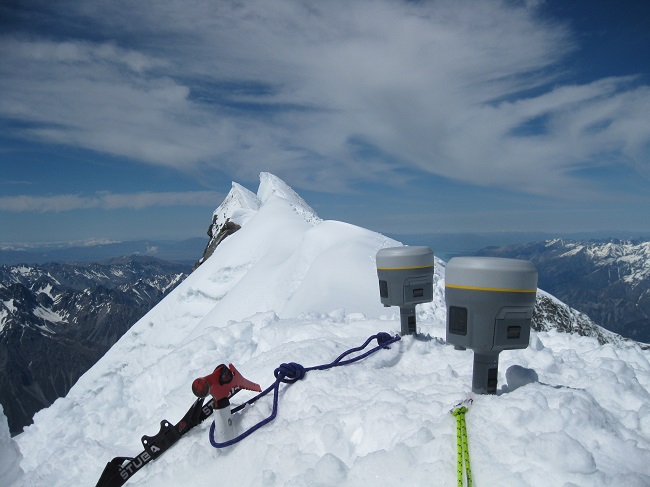 More than 20 years after the summit of Aoraki/Mt Cook was affected by a spectacular rock avalanche, a team of surveyors and geographers led by Dr Pascal Sirguey engaged in a new survey to establish the height of this iconic landmark.

Find out more about the height of Aoraki/Mt Cook.

New Zealand straddles the active Pacific-Australian plate boundary, resulting in significant crustal deformation associated with the Alpine Fault. We have established GNSS networks to measure the uplift of the Southern Alps (SAGENZ) and to study the variation of strain rates in Central Otago (COD). We are also involved with South Island component of GNS Science’s national deformation programme used to create the national deformation model.

Find out about research involving Earth deformation at the School of Surveying.

Find out about research involving Geoid modelling at the School of Surveying.

In the past few decades, the American Global Positioning System (GPS) has been the number one positioning tool for Geodesy and Geophysics. The emerging multiple-frequency Global/Regional Navigation Satellite Systems (GNSSs/RNSSs) will enhance a wide range of positioning applications. The systems are the American Global Positioning System (GPS), Russian GLObal’ naya NAvigatsionnaya Sputnikovaya Sistema (GLONASS), Chinese BeiDou Navigation Satellite System (BDS), European Galileo, Japanese Quasi-Zenith Satellite System (QZSS), and the Navigation with Indian Constellation (NavIC). The research conducted at the School of Surveying is focused on combining the different GNSSs/RNSSs for precise (millimetre-level) positioning, which can support a wide range of different research disciplines.

Find out about research involving GNSS positioning at the School of Surveying.

In the future, higher sea levels are an inevitable consequence of current day climate change. The question of how high sea levels will increase over this century is difficult to answer. New Zealand has several tide gauges with records extending back to the start of the 20th Century. These have been carefully analysed to determine the rate of sea level rise as well as the estimation of the vertical land motion at each site using GNSS and levelling techniques.