The Global Navigation Satellite Systems (GNSSs) are used for many Earth-based positioning applications, such as car navigation, hiking, and maritime navigation on the open sea. The real-time kinematic (RTK) technique is required for precise centimetre-level positioning, where in addition to the code measurements with decimetre-level precision the carrier phase measurements with millimetre-level precision are required. The receiver positions can be estimated with centimetre-level precision once the unknown phase ambiguities can be determined to their correct integer cycles. This is referred to as RTK, or integer ambiguity resolution. The RTK technique can be used for, among many other industries, construction engineering, cadastral surveying, precise farming and precise aircraft landing. The single-baseline RTK technique involves two GNSS receivers. Provided that the baseline length between the two receivers is of at most a few kilometres, the relative slant ionospheric and tropospheric errors can be neglected. The troposphere is the lower part of the atmosphere with a height above the Earth’s surface of 0-50 kilometres, whereas the ionosphere is the upper part with a height of 50-1000 kilometres. In this project we will make use of baseline lengths of at most a few kilometres so that the relative atmospheric delays become negligible or very small, and thus low-cost instantaneous precise RTK positioning becomes feasible (see Figure 1). 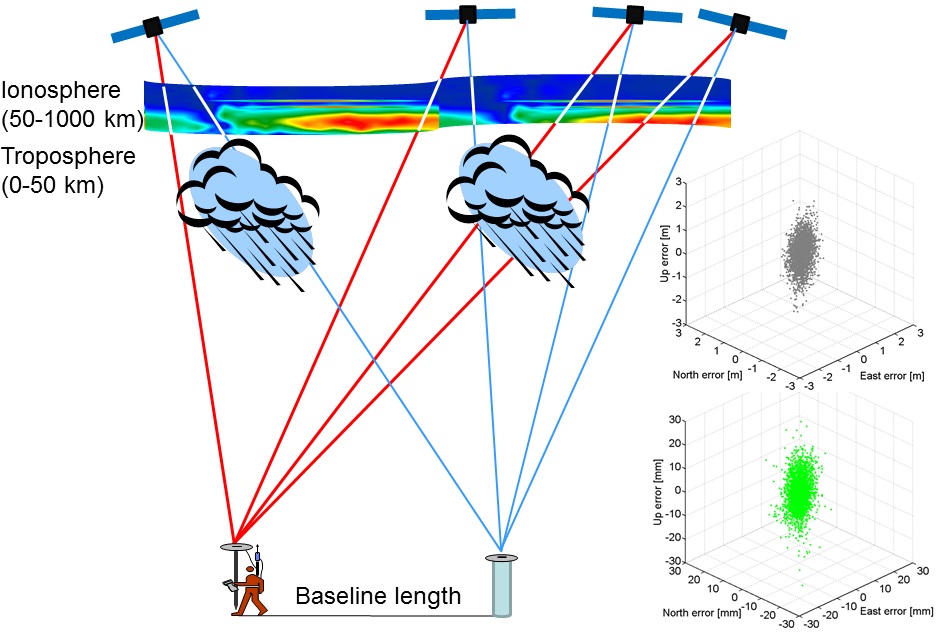 Figure 1. Single-baseline RTK, where low-cost single-frequency receivers can be used if the baseline length is a few kilometres (left) and multi-GNSS observations are available. The positioning scatters (right) are in local North, East and Up for (top) code-only and (bottom) code+phase observations (RTK). Note the two order of magnitude of positioning precision improvement when going from code-only (metre-level) to including phase observations (millimetre-centimetre-level)

The American Global Positioning System (GPS) has been in use since the 1980s and in 1995 it was declared of full operational capability (FOC). Since GPS has been the only system in orbit (in addition to the Russian GLONASS) in the past few decades, dual-frequency RTK receivers have traditionally been used for precise RTK positioning. Since 2011, for instance, the regional Chinese BeiDou has been in operational status and when combined with GPS it can give double the number of satellites in the Asia-pacific region. Because of the increase in the number of satellites in such a combined model, single-frequency RTK becomes feasible. This can thus allow for use of low-cost single-frequency receivers (with a price of a few hundred dollars per receiver) in competition with much more expensive survey-grade, dual-frequency RTK receivers (costing several thousands of dollars per receiver). This project aims to analyze the performance of L1 GPS + B1 BDS in Dunedin, New Zealand using low-cost receivers. A comparison will be made to the performance of that of L1,L2 GPS survey-grade receivers. Such single-frequency low-cost receiver solutions will be even further enhanced by the year of 2024 when BDS, European Galileo, Japanese Quasi-Zenith Satellite System (QZSS) and Indian Regional Navigation Satellite System (IRNSS) will all be of full constellations, as well as the modernization of GLONASS to transmit Code Division Multiple Access (CDMA) signals similar to the other constellations.

This project is undertaken in collaboration with Prof. Peter J. G. Teunissen at the GNSS Research Centre of Curtin University of Technology in Perth, Australia.