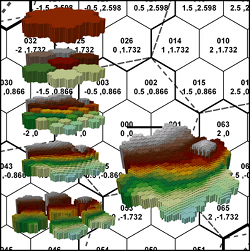 To capture the high spatial variability of urban hydrology, distributed hydrological and hydraulic models are being developed that employ hexagonal hierarchical data structures. Surfaces in urban environments have highly variable and spatially discontinuous hydrological properties. For instance, engineered drainage channels and storm water reservoirs can have large, but highly localised, effects on a catchment’s surface water hydrology, and surface permeability varies rapidly due to relatively impermeable surfaces such as concrete and asphalt being interspersed with more permeable, natural surfaces.

Hierarchical hexagonal arrays have been shown to have measurable advantages over rectangular arrays in hydrological models. In contrast to a rectangular grid, a cell in a hexagonal array has an isotropic neighbourhood. All six of a cell’s neighbours are equally distant, all connect to the central cell by lines, and all neighbours are separated from each other by lines that radiate from the centre of the central cell. Organising the regular subdivision of space hierarchically facilitates multi-scale analysis, variable resolution sampling, image display, multi-core processing and further development of innovative spatial data analysis techniques.