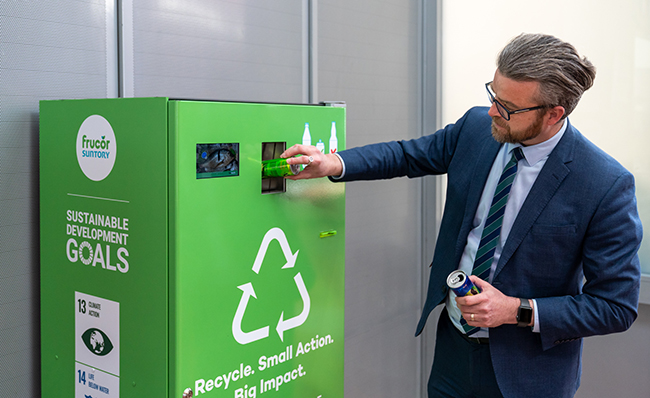 The reverse vending machine in use.

A first reverse vending machine for recycling cans and plastic bottles – believed to be New Zealand’s first – is dispensing discount vouchers on our Dunedin campus in a joint campaign with drinks manufacturer Frucor Suntory, to encourage recycling.

The vouchers from the machine in The Link can be used to partially redeem against a range of drinks, including bottled water, juices, kombucha, coffee in a can, sports and energy drinks, and carbonated beverages, University of Otago University Union Operations Manager Martin Jones says.

University of Otago Sustainability Office Head, Ray O’Brien says five million plastic bottles were recycled in just over a year when a supermarket chain introduced reverse vending machines in five of its outlets in the United Kingdom in 2018.

While customers there got 10p for each bottle, environmental reasons actually motivated more than two-thirds of them. And 95 per cent thought a similar system should be extended to all retailers.

“Worldwide, the sale of drinks in plastic bottles totalled about 480 billion dollars in 2016, but fewer than half were recycled, so the rest ended up in landfills (the tip), oceans or rivers, littered our landscapes, or were burnt,” Ray says.

Incentivised reverse vending – which includes dispensing vouchers to reward recycling – has been proven to help stop plastic pollution by offering a convenient and attractive reason to recycle.

“When the collection method is so focused, the food-grade plastic is also less likely to be contaminated or unusable, because people have to sort their plastic correctly to put it in the machine,” he explains.

New Zealand is recycling in a busy, competitive global market where buyers aim to avoid contamination that can be expensive to remove, and do not want soft plastics but do buy high-grade plastics – numbered 1, 2 and 5 – which include plastic bottles.

Those plastics, like aluminium cans, are easy to recycle and turn into other useful products, Ray says, and it is still much cheaper to recycle because sending plastic to landfill can cost about $80 to $90 a tonne more.

Frucor Suntory’s Head of Sustainability Ben Walkley says: “We are delighted to be able to support like-minded organisations such as the University of Otago on important issues regarding our environment. We’ve set clear sustainability commitments as part of our long-term plan, and this is a great demonstration of the support we want to give to make recycling easy. And there are plenty more initiatives to come!”

Property Services Division Director Dean Macaulay says the reverse vending machine will be emptied for recycling under our University’s contract with Waste Management.

It would involve a refundable deposit on drink containers, for example 10 to 20 cents (or more). People would redeem that deposit when they recycle their drink containers at a collection depot or drop-off point.

“Overseas experience shows a refundable deposit puts the value back into recycling and results in a big increase in returned containers. A scheme could lift recovery and recycling rates for numbers of beverage containers in New Zealand from around 45 percent – 58 percent to 80 percent, or more,” she said, when announcing the scheme.

At least 40 container return schemes operate globally; most Australian states have one, along with parts of Europe and the United States.

A comprehensive proposal for New Zealand is being presented to the Government later this year, says a spokesman for Ms Sage.