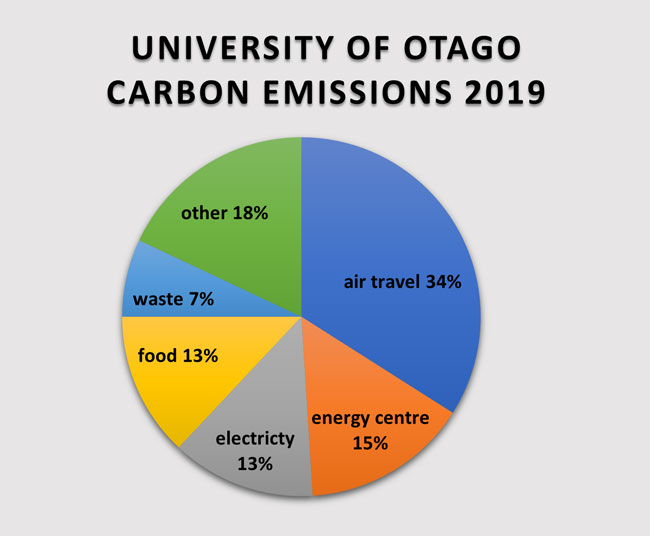 The University’s carbon emissions in 2019.

While significant progress reducing those emissions has been made, there are more opportunities: “We want to squash our carbon emissions as far as we can,” he says.

Air travel has plummeted since COVID-19 made visiting other countries highly risky and flight numbers dropped dramatically. The pandemic’s flow-on financial effects combined with continued outbreaks has changed our attitude towards air travel.

“Air travel wasn’t a frivolous activity (but) now it’s thinking about being strategic about using air travel – how to get more value,” Craig says.

That could involve making sure every trip is packed full of activities rather than travelling backwards and forwards. And IT staff are working on expanding the University's video-conferencing capabilities as an alternative to travelling internationally and nationally to attend conferences and hold meetings across campuses.

We are now forecasting our annual staff air travel carbon emissions will have dropped by about two-thirds – from 11,890 to 3600 tCO2-e for long and short haul international flights combined with domestic.

Because some air travel will always be necessary, the University is investigating how to offset those emissions by helping to regenerate native forest.

The University has also halved its emissions from energy use by sparking the change from coal to woodchips in the Dunedin Energy Centre boiler that produces steam and hot water for the Dunedin campus, he says.

The University has been steadily reducing our coal-fired boilers on Otago campus as well. Planning is underway to address the last remaining boilers by converting the boiler at Arana College to wood chips and decommissioning boilers at the Hercus Taieri Resource Unit.

The Property Services Division is going to start installing systems to monitor real time power demand in University buildings that use the most energy, and to analyse that data to target effective changes.

Energy efficiency measures have been added to the University's standard building upgrade process as well, including putting specialised film (low emissivity) on windows because it can be as effective insulation as double-glazing.

To cut emissions from food, residential colleges for students have introduced Mindful Mondays, making all meals that day plant-based, which is expected to reduce carbon emissions from ordering food by at least 15 per cent this year compared to 2019, Craig says.

The food ordering system now also shows the carbon emissions linked to products as they are being ordered.

An initial focus on the University's sixth highest carbon emitter sent the amount of waste going to landfill plummeting by 62 per cent between 2012 and 2019, to 1908 tonnes – and that total has now fallen further by changing our purchasing method, he says.

Replacing contracts with four companies with a single Waste Management NZ contract in 2019 created a unique partnership that incentivises the company to aggressively reduce campus waste rather than paying companies for the number of bins they empty.

Now the University is working towards halving its 2018 waste total of 2660.57 tonnes through that partnership and have already slashed it to 1518 tonnes last year, a drop of 43 per cent since 2018.

For purchasing in general, “we need to have strong relationships with people whose sustainable objectives align with ours,” Craig says.

The University also started rolling out new recycling options in earnest inside Dunedin buildings in September 2019 and they now cover about 15 buildings, along with the Wellington campus and the Auckland Dental Facility. On average that has led to 35 per cent more being recycled, Craig says.

The new recycling options involve rubbish bins at people’s desks being replaced with desk-top ‘precycler’ containers – for paper, cans, and plastic – that each person delivers to a ‘station’ of colour-coded bins, one each for paper, glass, co-mingled waste (plastic, aluminium, and tin) and general waste. Previously, staff ‘s recycling options were less visible and accessible

Other changes include skip days for students’ unwanted items switching to six skip diversion days from this year, to include not only getting rid of general waste but recycling options for cardboard, glass, and cans.

Work on decreasing the University’s carbon emissions is continuing and “we need to do it without affecting our core: excellent in teaching and research, outstanding campus environments and student experiences … “, Craig says.

He started his job as Net Carbon Zero Programme Manager this year and says it involves forming connections: “It’s not all about coming in and taking over, it’s about working with people in the opportunity space, but also the academic side … how do we connect the challenges we’re facing to the course work, then how can we share that more widely for others to follow”.

The University could become more of a living laboratory, where research is applied in our University workplaces and tested, then the results are shared.

The Climate Change Commission believes becoming more sustainable is easier with a tailwind, when others are also leading the push towards sustainability, so Mr Cliff is asking “how can we demonstrate leadership?”

More information on the University's Net Carbon Zero Programme can be found here.

The Sustainability Office is part of the University’s Operations Group, which has three top priorities: